51 Suddenly, the curtain of the sanctuary was split in two from top to bottom; the earth quaked and the rocks were split.

“The curtain of the sanctuary was split in two from top to bottom.”  The huge curtain of fine Babylonian tapestry[1] was the point of separation between the most sacred place in the temple, known as the Holy of Holies, and the holy place where common people came to worship God.  It was about sixty feet high and thirty feet wide by four inches thick. The curtain was woven of seventy-two twisted plaits, with each plait consisting of twenty-four threads. It was so massive and heavy that it was said that it required three hundred priests to manipulate it, since every years two plaits were replaced.[2]

The fact that it was torn from the top indicates that it was God who tore the curtain, thereby permitting all humanity to enter into His presence.  In ancient times, it was from behind this curtain that God would reveal Himself to the ministering priest.  There are three reasons why the gospel writer mentioned the torn curtain, which is also referred to as a veil.

The veil was one handbreadth thick and was woven on (a loom having)[3] seventy-two rods, and over each rod were twenty-four threads.  Its length was forty cubits[4] and its breadth twenty cubits; it was made by eighty-two young girls, and they used to make two in every year; and three hundred priests immersed it.

Finally, the miracles and teachings of Jesus, the illegal trials, the incredible incidents that occurred when Jesus died, most certainly made some priests and Levites realized that maybe Jesus really was who He said and demonstrated to be – the Son of God. These were the proverbial stepping stones that led many of those priests and Levites to become followers of Jesus in Acts. 6:1.

17.01.02.Q1 What became of the Sanhedrin after the crucifixion of Jesus?

After the death of Jesus, the Sanhedrin was exiled from its regular meeting place in the Chamber of Hewn Stone within the temple. The reason why it was relocated is shrouded in mystery, but interestingly, the Babylonian Talmud states that it was relocated to a hilltop known as Hanuth (see 17.01.02.A).

Forty years before the temple was destroyed did the Sanhedrin abandon (the Temple) and held its sittings in Hanuth. 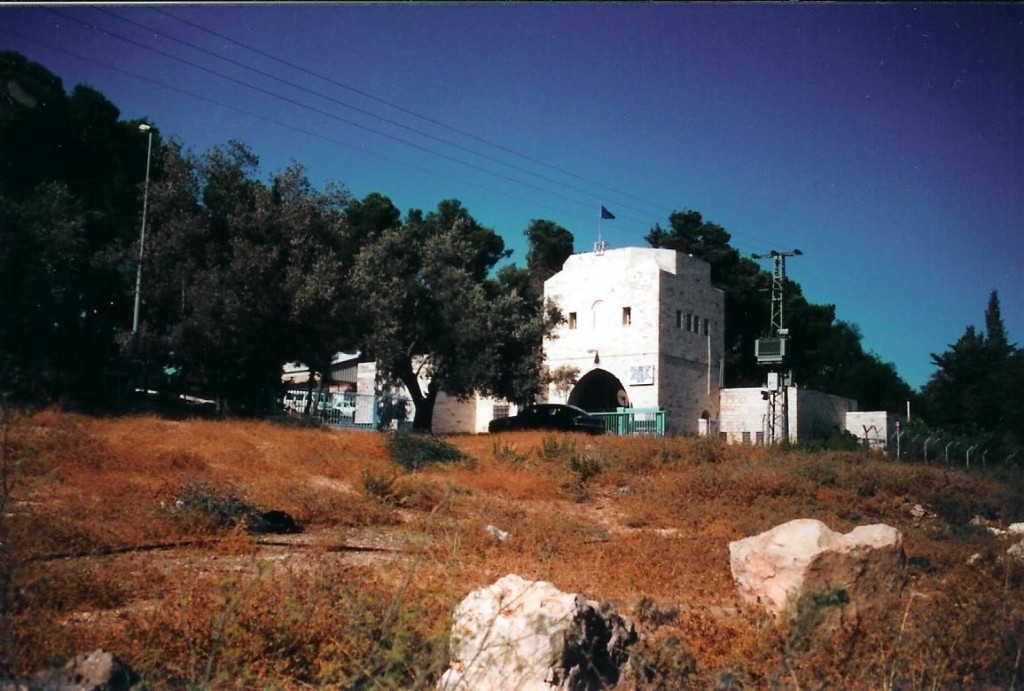 17.01.02.A. THE HILL OF EVIL COUNSEL.  After the crucifixion of Jesus, the Sanhedrin relocated its court to a nearby hill that became known as the Hill of Evil Counsel.  It is where the Sanhedrin met during forty years prior to the destruction of the Temple.  Today it is the site of the United Nations complex.  Photograph by the author.

The location of the “Hanuth” appears to be a subject of debate.  While some believe it was another location on the Temple Mount, the majority opinion is that the High Court met on a hill south of the temple.  Ironically, that hill became known as the Hill of Evil Counsel and today is the home of the United Nations headquarters in Israel.

After the crucifixion of Jesus, the Sanhedrin continued to function until the temple was destroyed in A.D. 70.  Caiaphas and the Sadducees were all mercilessly slaughtered. Unfortunately, their corruption and arrogance continued to be a hallmark of this body.  New members were brought into the Sanhedrin to replace those killed in the revolt.  The high court was then relocated to Tiberias and eventually disbanded.[6]

Yes.  It can be assumed that if the Sadducee-controlled high court was so powerfully wicked as to stage the execution of Jesus, then may have been other cases where this same abuse of power was demonstrated. As previously mentioned,[7] Josephus recorded the account of Honi, the “Circle Drawer.”[8] Jewish writers also preserved two accounts, but first, the summary account of Honi:

In the year 63 B.C., the religious leaders were challenged by Honi, who had become a popular folk hero.  People said that when he prayed, God answered. He is best remembered for the time when there was a severe drought.  He drew a circle in the dust, sat inside the circle, and prayed until it rained. Soon it did.  The leading Pharisees and Sadducees were greatly angered that he could perform such a miracle, especially since he had not graduated from one of their established seminaries in Jerusalem. Since they could not excommunicate him because the people loved him, they secretly had him killed.[9]

There are also several examples recorded in Jewish writings of which the following two are of interest and a third that is obviously a legend.  At one time a priest who was assumed impure was clubbed to death without a trial, as recorded in the Mishnah.

A priest served [at the altar] in a state of uncleanness [and] his brethren the priests did not bring him to the court, but the young men among the priests took him outside the temple Court and split open his brain with clubs.

In another case, the daughter of a priest was burned for being suspected of adultery and, again, there was no evidence of a trial. The Roman law against capital punishment was ignored.

It happened once that a priest’s daughter committed adultery and they encompassed her with bundles of branches and burnt her.

However, the most common account that survived the centuries is the legend of Rabbi Eliezer. The court of Caiaphas was so famously wicked that a mythical story about it was recorded in the third or fourth century. This and other accounts illustrate that Jesus was not the only one who had conflicts with the Sanhedrin.  With the Sadducees annihilated in A.D. 70, the court was in the hands of the Pharisee elitists. Unfortunately, they too were corrupt and ignored jurisprudence,[10] when convenient.

According to the legend, a certain Rabbi Eliezer was a righteous man who criticized the Sanhedrin for its evil ways.  To prove that he was truly a man of God, he performed three miracles.

These three miracles were performed to prove to the Sanhedrin that God’s divine authority and power was with him.  However, even when the voice of the Lord came forth, the response of the high court was negative.

On that day, Rabbi Eliezer brought forward every imaginable argument, but they would not accept them.  Said he to them: “If the Halachah (Scripture)[11] agrees with me, let this carob tree prove it!’  Thereupon the carob tree was torn a hundred cubits out of its place – others affirmed four hundred cubits.[12] No proof can be brought from the carob tree, they retorted.

Again, he urged: “If the Halachah agrees with me, let the walls of the schoolhouse[14] prove it.” Whereupon the walls inclined to fall.  But Rabbi Joshua rebuked them saying: “When scholars are engaged in a Halachic dispute, what have you to interfere?”  Hence, they did not fall in honor of Rabbi Joshua, nor did they resume the upright in honor of Rabbi Eliezer, and they are still standing thus inclined. Again, he said to them: “If the Halachah agrees with me, let it be proven from heaven!”  Whereupon a Heavenly Voice cried out: “Why do you dispute with Rabbi Eliezer, seeing that in all matters the Halachah agrees with him!”  But Rabbi Joshua arose and exclaimed: “This is not heaven” (Deut. 30:12). “What did he mean by this?” Said Rabbi Jeremiah: “That the Torah had already been given at Mount Sinai; we pay no attention to a Heavenly Voice; ‘After the majority must one incline’” (Ex. 23:2).

While this is an old passage, obviously it has been translated for the benefit of modern readers. Hence, problems with it include the term “schoolhouse,” as synagogues in ancient times also served as local schools. Another problematic phrase is “inclined,” which, in this context, means the Sanhedrin was favorably disposed to its own decision.

This account clearly indicates that first century Sanhedrin used its power for its own purposes. It is a remarkable record of dependence upon human reasoning that is supposedly said to be based upon biblical regulation (i.e. Deut. 30:12; Ex. 23:2), while ironically, rejecting the voice of God Who gave the biblical regulations. It is not surprising to see that these Scriptures were taken out of context to support the argument against Rabbi Eliezer ben Hyrcanus.

The Sanhedrin had degraded to the point that it no longer followed its own code of conduct.  It not only failed miserably concerning the three so-called trials of Jesus, but also with His half-brother James. Evidently the number of followers of Jesus was growing exponentially, to the point that the Sadducees were desperate to do anything to stop the movement. According to Josephus, they eventually,

Assembled the Sanhedrin of judges and brought before them the brother of Jesus, who was called Christ, whose name was James, and some others [or, some of his companions].

James and those “others,” mentioned by Josephus, against whom accusations were made by the Sadducees, were stoned to death. The historian said that Ananus was the high priest responsible for the death of James. When King Agrippa heard of the gross injustice, he removed Ananus from the high priesthood position where he had served in that capacity for only three months.[16]

[10]. “Jurisprudence” is the study and philosophy of law, and in this case, the course of legal procedure according to law.