24 When Pilate saw that he was getting nowhere, but that a riot was starting instead, he took some water, washed his hands in front of the crowd, and said, “I am innocent of this man’s blood. See to it yourselves!”

25 All the people answered, “His blood be on us and on our children!” 26 Then he released  Barabbas to them. But after having Jesus flogged, he handed Him over to be crucified.

The accusers presented alleged offenses, but could not convince Pilate that Jesus was guilty of any crime. The progression of Pilate’s attempts to release Jesus is noteworthy.

Finally, Pilate surrendered to Caiaphas and his hysterical mob. Since there was no defense, Pilate pronounced execution by crucifixion.[1] He then “took some water, [and] washed his hands.”  This was the sixth and final declaration of innocence concerning the charges against Jesus of Nazareth.  The washing of hands was a common ritualistic act that declared innocence when a life was lost by accident.  The washing of hands was already at this time an ancient symbol among many cultures for declaring innocence involving the death of a person.  Some fourteen centuries earlier, Moses recorded the atonement for an unsolved murder that included the elders of the town washing their hands over the broken neck of a heifer (Deut. 21:6-9). David did likewise in Psalm 26:6 and 73:13. As Pilate would eventually learn, his guilt could not be washed away because he was guilty.

He then announced, “I am innocent of this man’s blood.”  However, that statement did not release him from the consequences and responsibility for his decision.   He failed to stand up for what was right, but instead, caved in to the pressure of a minority group. Even his wife had warned him. He could have given Jesus His freedom, exiled Him from the country, or invoked any number of other options, but he didn’t. It is ironic that pagan justice was more just than the justice of the Jews, who were to represent the love and justice of God.

Furthermore, Josephus stated that Pilate attempted to abolish Jewish laws, set up statues at night without the knowledge of the local religious leaders, and used temple money to bring water into Jerusalem.  Pilate eliminated his opponents by having his soldiers wear street clothes, surround the opponent in a crowded street, and at a given signal, they stabbed him. The soldiers would then keep on walking and disperse.[2] It was a tactic used by the Zealots, whom the Romans called Sicarii. Clearly, Pilate disliked the Jews and their religion. Overall, he failed to offer them consideration afforded by other Roman prefects. He frequently reflected the beliefs and lifestyle of Antiochus IV Epiphanes, who ruled some two centuries earlier.

Pilate may have claimed innocence by the washing of his hands, but God did not see it that way.  The rest of his life was in constant turmoil.  He met his demise as the result of his response to a Samaritan “rebellion.” Some scholars believe it was a messianic movement while others say that a certain imposter claimed to have found some artifacts that were hidden by Moses.  Regardless, in A.D. 36 Pilate sent his troops to the Samaritan village of Tirabatha and the result was a huge slaughter of innocent people.[3] The Samaritans complained to Vitellius, telling him that the whole matter was not a rebellion, but a harmless religious movement. Furthermore, Pilate’s soldiers killed many refugees.

When the senseless killing became known in Roman circles, Pilate was ordered by Vitellius, the legate of Syria, to sail to Rome and defend himself. However, by the time he arrived, Emperor Tiberius had died. Nonetheless, he was removed from office.[4] According to Eusebius, Pilate was exiled and committed suicide, although another account says he suffered death under Emperor Nero.[5] The account of Pilate’s last days as recorded by the early church father Eusebius is as follows:

It is proper also to observe how it is asserted that this same Pilate, who was governor at our Savior’s crucifixion, in the reign of Gaius (Caligula), whose times we are recording, fell into such calamities that he was forced to become his own murderer, and the avenger of his own wickedness.  Divine justice, it seems, did not long protract his punishment.  This is stated by those Greek historians who have recorded the Olympiads in order together with the transactions of the times. 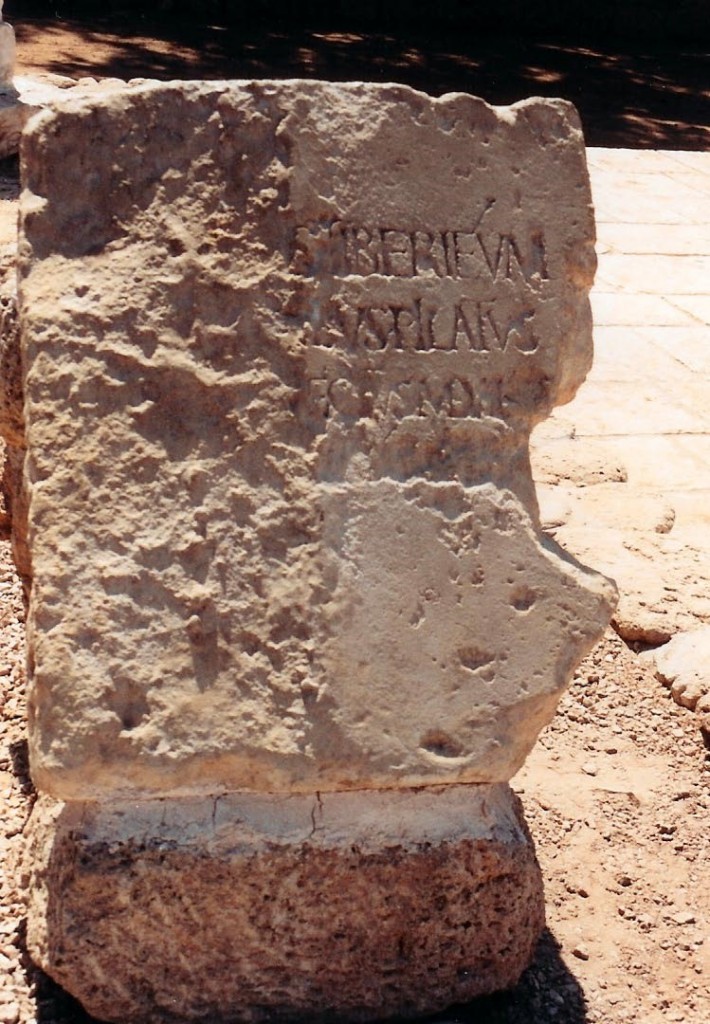 16.01.06.A. INSCRIPTION OF PILATE AND TIBERIUS.  A monument with an inscribed reference to Pilate and Tiberius was discovered in 1961 for a building known as the Tiberius.  It was the dedication stone of the Roman theater in Caesarea Maritima built by the architectural genius, Herod the Great.  Photographed by the author at Caesarea. The inscription completed (below) by the Israel Museum.

This damaged inscription is the only one found that refers to Pilate.  Notice that his title was “Praefectus Iduaeae” or Prefectus Judaea. Until this time, scholars believed the official title of Pilate to have been “procurator.”[7]

16.01.06.B.  THE INSCRIBED LATIN WORDS THAT HONOR PILATE AND TIBERIUS.

“His blood be on us and on our children.” In the rage and anger of mob hysteria, the Jews (namely the Sadducees and their friends) eagerly cursed themselves and their future generations.  The power of words by mere mortals is, at times, more dynamic and powerful than can possibly be imagined. Forty years later the entire Sadducean leaders and their families were slaughtered by the Romans as the temple was destroyed. Furthermore, two thousand years of history demonstrate that this curse has followed them throughout the world.

The fact remains that Jesus still had an immense following of people who desired to see Him become the political-messiah who would bring national independence and greatness as King David had done. The gospels place the blame for the death of Jesus upon the national leadership of the Jewish nation, as well as the Romans. Reasons for His death are historical, theological, and spiritual, but not racial.

Pilate had a devotion for doing whatever pleased himself, with little or no regard to anyone else, and especially the Jews. This is clearly evident in a letter written by Philo around the year A.D. 41.  Philo, discussing the attempted placement of a statue of Gaius Caligula in the temple, inserted a description of Pilate. Philo said that,

Philo, On the Embassy to Gaius 302

Philo continued his description of Pilate as one who willingly accepted bribes, committed unjust acts of violence, and shamefully treated many. In fact, the Jews looked upon the days of Herod the Great with regret as life had become much more difficult under Pilate.[8] However, the long arm of justice eventually caught up with him. Shortly after the crucifixion of Jesus, Rome became uneasy with the job performances of both Caiaphas and Pilate. The corruption and cruelty of these two men became more than the Emperor Gaius and Roman Senate could tolerate. So sometime around late A.D. 36, according to Josephus,

[The Syrian governor, Vitellius] ordered Pilate to return to Rome to give the emperor his account of the matters with which he was charged…[9]

[and] he removed from his sacred office the high priest Joseph, surnamed Caiaphas, and appointed in his stead Jonathan, son of Ananus the high priest.[10]

By the summer of A.D. 37, both men were removed from office. Nonetheless, the fact is that Pilate was one of the most corrupt and cruel procurators Israel ever had.  Yet it is incredible that a monarch of such depraved character had to admit that he could find no fault in Jesus.[11] Both gospel writers noted the triadic insistence for two reasons:

the most emphatic insistence that he could give to declare innocence of Jesus.

In summary, up until this time there were three major errors committed by Pilate which profoundly influenced his decision concerning Jesus.

The power of Pilate over the people was broken. Pilate had lost all three confrontations and some historians believe that Caesar was aware of them. From that time on the Jews knew how to extort concessions from him.  Philo, a Jewish philosopher who lived in Egypt, said that the Jews threatened to report the misdeeds of Pilate to the Emperor.[18] Obviously, later the leading Jews essentially blackmailed him into crucifying Jesus, as he feared they would go to Rome and file a complaint with the emperor. His career was clearly on the line. Ironically, his final misjudgment was a massacre of many Samaritans a few years later that ended his stay in the Middle East.

In addition, there are two other points to consider.

Corruptibility, violence, robberies, ill-treatment of the people, grievances, continuous executions without even the form of a trial, endless and intolerable cruelties.

And so ended the career of Pilate.  Tradition says it was in exile that he committed suicide.

All those who opposed Jesus met horrific deaths, just as did those three men who previously desecrated the holy temple.[20]  Divine judgment followed those who were involved in both the planning of the crucifixion and the final act. Note the following brief accounts:

On an interesting side note, due to Roman persecutions against Christians, many early church leaders blamed all the Jews rather than the Sadducees and Romans for the crucifixion of Jesus. A few went as far as to speak highly of Pilate, even though church liturgy clearly stated that it was Pilate who sent Jesus to the cross. In fact, Tertullian who was one of the early church fathers around A.D. 200, referred to Pilate as being “Christian in his conscience.”  The Greek Orthodox Church canonized Pilate’s wife Procula, and the Ethiopian Church recognizes June 25 as “St. Pilate and St. Procula’s Day.”[24]

[1]. Sherwin-White, Roman Society and Roman Law in the New Testament. 25.

[9]. Judea and all the Jewish lands controlled by Pilate, Herod Philip, and Herod Antipas, were part of the larger district of Syria, of which the capital was Damascus.  Therefore, Pilate reported to Vitellius, governor of Syria, who reported to Emperor Gaius.

[10]. Ananus held the title of high priest even though he was retired and no longer functioned in that office. It was a title of honor that was held throughout life.

[15]. Their brother Archelaus was no longer in the land after A.D. 6. Some scholars question if it was these two brothers (Antipas and Philip) who argued before the emperor, since Herod the Great had three other sons who did not inherit lands to govern: Herod the son of Mariamne, Herod the son of Cleopatra, and Phasael the son of Pallas. It is possible two of these brothers went to Rome and argued against Pilate. See Josephus, Antiquities 17.1.3; Wars 1.28.4; Philo On the Embassy to Gaius 30.

[22]. How interesting it is that today the United Nations is located on this hill.