Jn. 33 Then Pilate went back into the headquarters, summoned Jesus, and said to Him, “Are You the King of the Jews?”

34 Jesus answered, “Are you asking this on your own, or have others told you about Me?”

35 “I’m not a Jew, am I?” Pilate replied. “Your own nation and the chief priests handed You over to me. What have You done?”

36 “My kingdom is not of this world,” said Jesus. “If My kingdom were of this world, My servants would fight, so that I wouldn’t be handed over to the Jews. As it is, My kingdom does not have its origin here.”

“You say that I’m a king,” Jesus replied. “I was born for this, and I have come into the world for this: to testify to the truth. Everyone who is of the truth listens to My voice.”

After he had said this, he went out to the Jews again and told them, “I find no grounds for charging Him.

Mt. 11 Now Jesus stood before the governor. “Are You the King of the Jews?” the governor asked Him.

Jesus answered, “You have said it.” 12 And while He was being accused by the chief priests and elders, He didn’t answer.

13 Then Pilate said to Him, “Don’t You hear how much they are testifying against You?” 14 But He didn’t answer him on even one charge, so that the governor was greatly amazed.

“Are you the King of the Jews?” Again, Jesus was sarcastically asked to incriminate Himself.  He did not respond to Pilate in self-defense, but in a manner that would permit Pilate to act and judge as his office demanded. The Jews had been witness to many teachings and miracles of Jesus.  They heard Him preach on forgiveness, love, and all aspects of living a godly life. But Pilate did not have that privilege. Therefore, Jesus capsulated His ministry and messianic mission:

Evidence to support this statement occurred when one of His disciples pulled out his sword and cut off the ear of Caiaphas’ servant.  Jesus rebuked the disciple and healed the servant.  To Pilate, Jesus was simply a man of wild illusions, one who desired to have a kingdom – possibly somewhere among the stars, since it was not to be in this world.  He considered Jesus a harmless lunatic who, by some mystical power, was able to heal the sick.  The Romans had a well-established reputation for a quick execution of any self-proclaimed messiah who dreamed of leading the Jews to independence.  Jesus, however, was different and after several questions, Pilate could find no reason for His execution.

“What is truth?”  This has been the eternal question throughout millennia. Greek philosophers, modern humanists, atheists, and others have debated this question. Scholars have asked whether this was an honest question or sarcasm. Regardless, from the moment Pilate asked this question, it was he who was on trial. He saw Jesus as an idealist who was harmless to the empire and, hence, certainly not worthy of death.  He knew Jesus was innocent but would he make a judgment that reflected truth? Knowing truth and acting upon it should have been one and the same. It wasn’t. Pilate was facing truth, but rendered a wrongful decision.

It is an interesting irony of history that Jesus was before Pilate, where He was questioned about being the King of the Jews, when some three and a half decades earlier the magi came to this same city to ask where the king of the Jews was born.  Now Jesus was on trial for being the king and only Pilate could officiate over this matter.  This is the first Roman declaration of innocence.  He then sent Jesus to Herod Antipas for trial, because he did not have the courage to release Jesus.

“But He didn’t answer him.”  This was not only a fulfillment of prophecy and a position of humility, but also a condemnation of Pilate. The silence of Jesus speaks volumes to the fact that it was not Jesus, but Pilate who was on trial. In centuries past, the first king of Israel, Saul, had parted ways from God.  In response Saul said, “God has turned away from me. He no longer answers me, either by prophets or dreams” (1 Sam. 28:15).  As the Holy One was silent before King Saul, Jesus was silent before His accusers.

Pilate normally lived in Caesarea Maritima along the Mediterranean coast.  But during the days of Passover, he was in Jerusalem with extra soldiers in the event that some radical would announce he was the Messiah. Scholars now debate whether he resided in Herod’s palace by the Jaffa Gate or in the luxury suite in the palace of the Antonia Fortress. 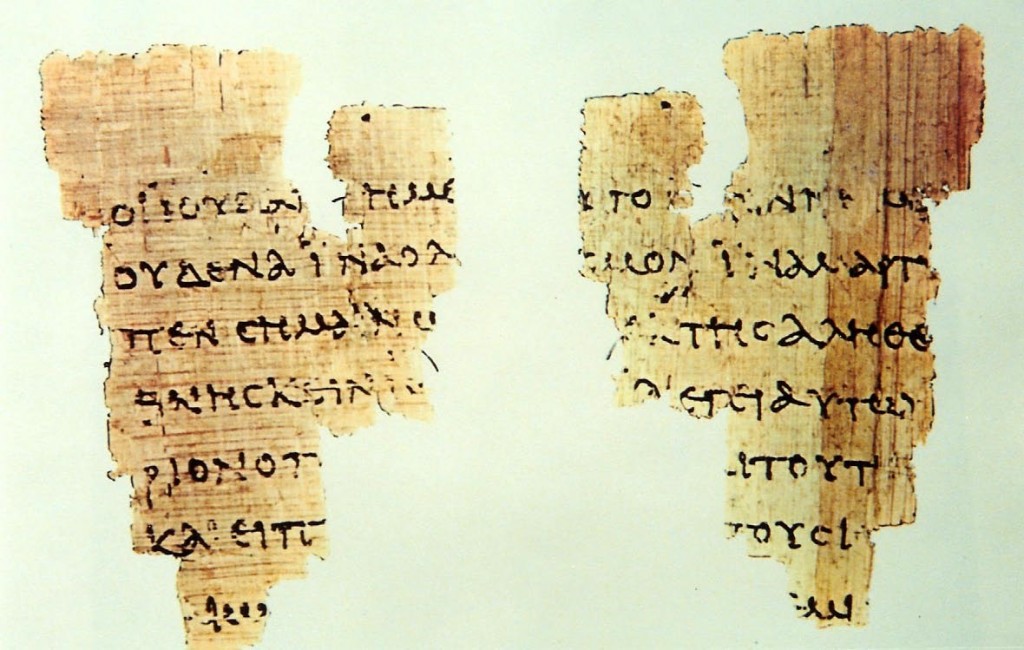 15.04.03.A. JOHN RYLANDS FRAGMENT.  A papyrus fragment, commonly known as Papyrus 52, containing John 18:31-33 and 18:37-38 is believed to have been written between the middle and end of the first century.  It is located in the John Ryland Library in Manchester, England. It is the oldest known manuscript New Testament fragment.

The Ryland’s Fragment is incredible evidence that the gospel of John is not a second or third century creation, as some critics claim but of the early second century.  Its significance, as well as others,[1] is positive proof that the gospels were written at an early date; proof that the gospels were transcribed accurately for two thousand years to the translations available today. Some scholars have concluded that the earliest edition of Matthew existed somewhere between A.D. 30 and 60, indicating it was written within a few decades of the death of Jesus, but before the destruction of the temple.[2]

Others believe this fragment to be dated between A.D. 70 and 125, which is still quite early.  This is significant in that it provides overwhelming support that many stories of miracles were, in fact, historical events and not myths added to the text by later editors, as some critics claim (without support for their opinions).  With so many early copies of this gospel circulating in the ancient Middle East, it would have been impossible to create legends and myths concerning Jesus that would have been accepted by the Church.

It is important to summarize the charges the Sanhedrin brought against Jesus when before Pilate.  Any one of these was worthy of crucifixion.

In summary, Pilate was by no means the ideal administrator of the Roman Empire.  He is remembered for his cruelty, yet he could see through the accusations of the Jewish leaders, and considered Jesus to be innocent. But he did not have the inner strength to stand in opposition to the Jews and administer fair justice.

[1]. For other listings of ancient papyri pertaining to the New Testament, see The Biblical Expositor. 8-12 and Packer, Tenney, and White, eds., The Bible Almanac. 65-84.