Lk. 55 They lit a fire in the middle of the courtyard and sat down together, and Peter sat among them. 56 When a servant saw him sitting in the firelight, and looked closely at him, she said, “This man was with Him too.”

Mt. 69 Now Peter was sitting outside in the courtyard. A servant approached him and she said, “You were with Jesus the Galilean too.”

70 But he denied it in front of everyone: “I don’t know what you’re talking about!”

71 When he had gone out to the gateway, another woman saw him and told those who were there, “This man was with Jesus the Nazarene!” 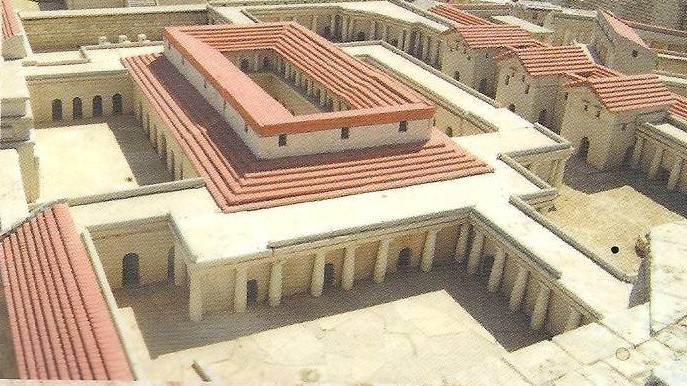 15.03.06.A. A MODEL OF THE PALACE OF CAIAPHAS THE HIGH PRIEST. The palace of Caiaphas was located within the Old City walls during the Second Temple Period, but is outside today’s Old City walls.

The opulent homes of the Sadducees were only a short distance from the temple.  They enjoyed so much political favor with the Romans that a private road was constructed from the temple to their homes. It was also built so they would not become “defiled” by the common people. Therefore, the distance they forced Jesus to walk was relatively short.  Their planned execution of Jesus was under way, with only a minimal sense of legal procedure.  Night trials, even if held in a private home, were illegal under both Jewish and Roman laws.[1] 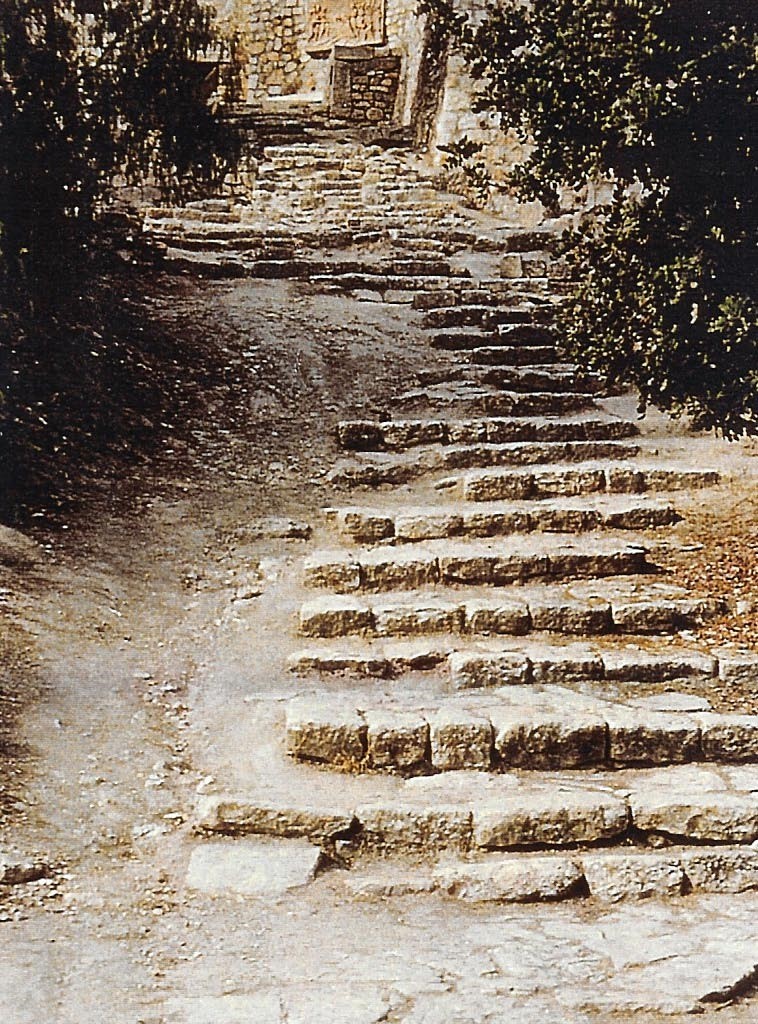 15.03.06.B. THE STEPS TO THE HOUSE OF CAIAPHAS.  Scholars believe these steps date to the first century or earlier and, therefore, Jesus would have walked on them.[2]  It is very possible that this walkway was the route taken by Jesus to the prison basement under the home of the high priest.[3]  Photograph by the author. 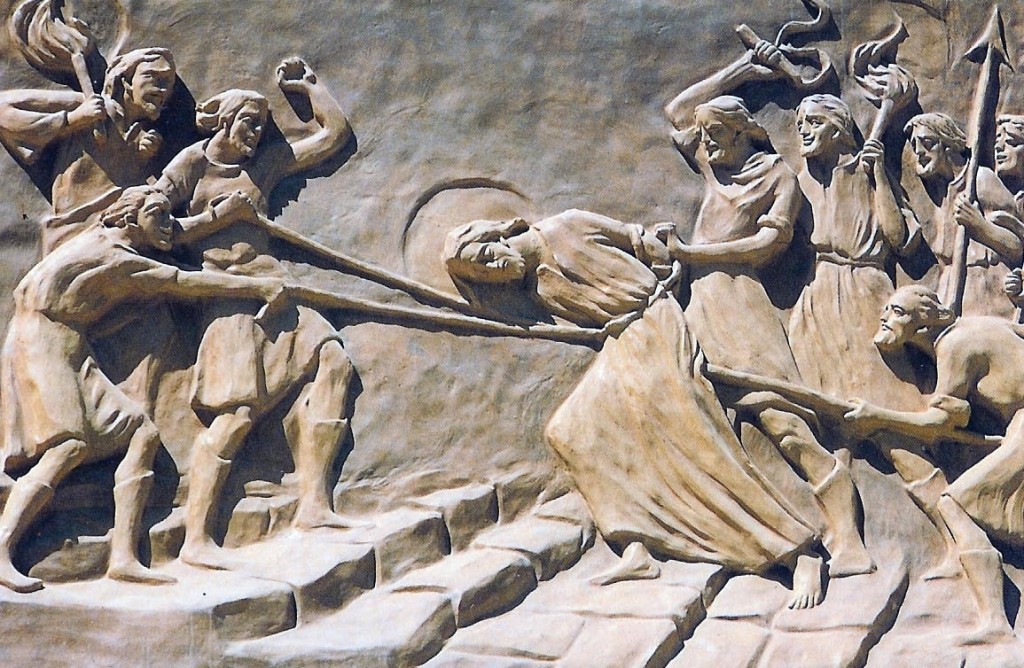 15.03.06.C. A WALL SCULPTURE DIPICTING JESUS ARRESTED AND TAKEN TO CAIAPHAS.  The sculpture depicts Jesus being beaten as He is taken to the home of the High Priest.  It was the intent of the Sadducees not only to kill Him, but to destroy the royal honor the crowds gave Him when He entered the city on a donkey.  Photograph by the author. 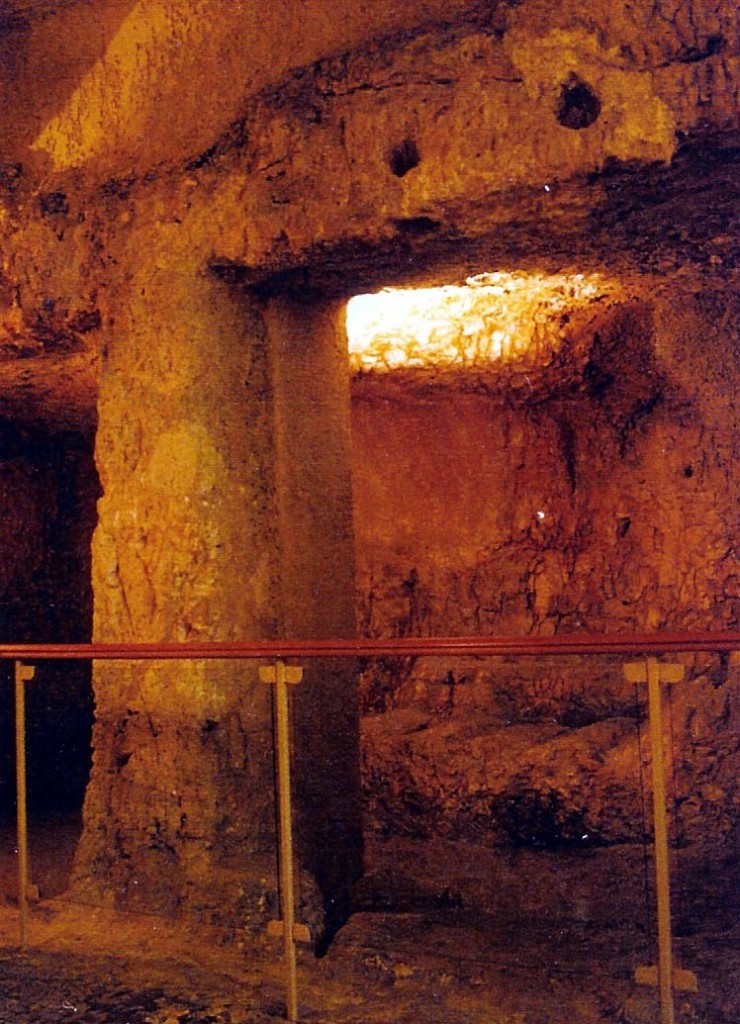 15.03.06.D. THE PRISON BASEMENT OF CAIAPHAS.  In the palace basement of Caiaphas, one can see the holes in the stone pillars and header through which chains were placed to hold prisoners – it was a private prison. Today the site is honored by the Church of St. Peter in Gallicantu (Latin: at the Cock’s Crow).  Photograph by the author.

It was common in ancient times for those in religious and government authority to have prisons in the basements of their homes.  These prisons did not always have iron bars, but rather, had holes in walls and columns to which prisoners were chained. Jesus would have been chained to one of these columns and possibly beaten.[4] In A.D. 333, the Pilgrim of Bordeaux, whose personal identity remains a mystery, made this comment about the ruins of the house of Caiaphas:

From there one ascends to Zion and there appears to be where stood the house of Caiaphas the priest, and the column is still there, on which they flogged Christ.

The prophetic words of the Psalm writer most certainly reflected the thoughts of Jesus as He was in the dungeon (cistern) prison.  The painful pressure that caused perspiration of blood was still upon Him.  His agony continued as He pleaded to His heavenly Father.

1 Lord, God of my salvation,

I cry before You day and night.

2 May my prayer reach Your presence;

Listen to my cry.

3 For I have had enough troubles,

and my life is near Sheol.

4 I am counted among those going down to the Pit.

5 abandoned among the dead.

I am like the slain lying in the grave,

whom you no longer remember,

and who are cut off from Your care.

6 You have put me in the lowest part of the Pit,

in the darkest places, in the depths.

7 Your wrath weighs heavily on me;

You have overwhelmed me with all Your waves. Selah

8 You have distanced my friends from me;

You have made me repulsive to them.

I am shut in and cannot go out.

9 My eyes are worn out from crying.

[2]. However, recent scholarship seems to conclude these are A.D. 4th century steps over a previous walkway.