THE AGONY OF GETHSEMANE

Jn. 1 After Jesus had said these things, He went out with His disciples across the Kidron Valley, where there was a garden, and He and His disciples went into it.

Mk. 32 Then they came to a place named Gethsemane, and He told His disciples, “Sit here while I pray.” 33 He took Peter, James, and John with Him, and He began to be deeply distressed and horrified. 34 Then He said to them, “My soul is swallowed up in sorrow —to the point of death. Remain here and stay awake.”

Jesus was very much aware of His purpose and destiny. He would not only have to face the cruel execution process, but spiritually He would die a sacrificial death for all the sins of humanity.  The thought that His crucifixion was just hours away caused profound emotional stress and agonizing pain. As He was engulfed in prayer, He perspired blood, yet remained faithful to His purpose and destiny. Every ounce of His human nature wanted to live, while His divine nature required that He surrender His life so that mere mortals might live to escape the crushing pain.  Hence, He was obedient, not to His human will, but to God’s plan for His life, which ultimately was His as well. 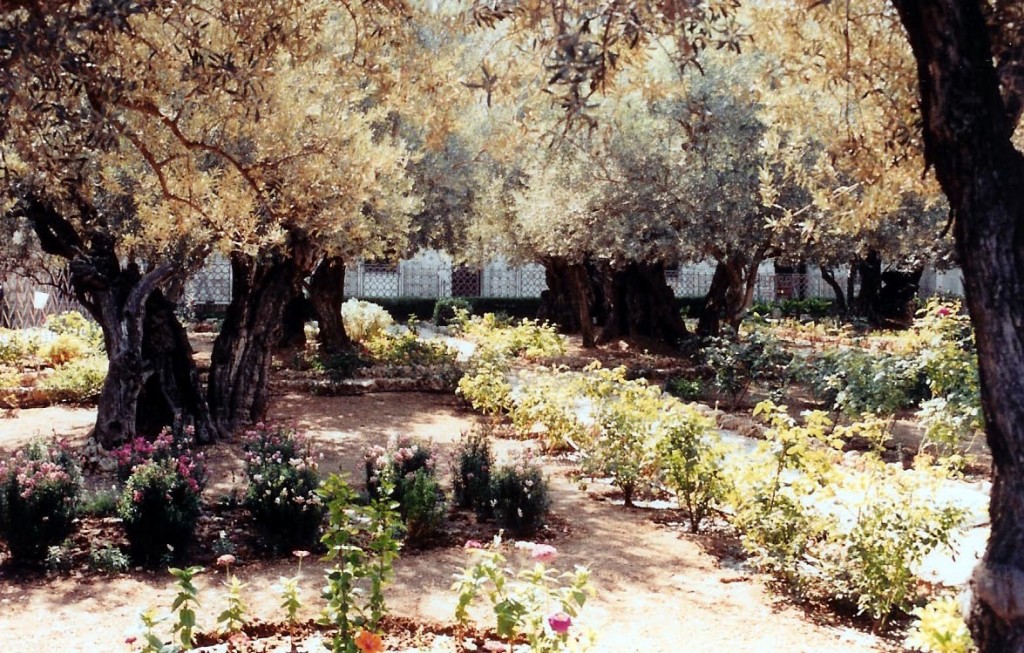 15.02.02.A. THE GARDEN OF GETHSEMANE.  The Garden at the time of Christ was an olive orchard with a possible vineyard.  Scholars believe it covered an estimated area of eight to ten acres, a major portion of the Mount of Olives.  These trees were already hundreds of years old when Jerusalem was destroyed by the Romans.  However, olive trees are known for their enduring root systems, and the trees seen today sprouted from the old root system after the destruction. Photograph by the author.

There are three traditions as to where Jesus stayed on the Mount of Olives:

Since Jerusalem is at the edge of the Judean Desert where the climate is semi-arid, the caves are generally dry all year long, as well as warm in the winter and cool in the summer.  Caves were often used as shelters for domestic animals, part of a house, or a temporary shelter for travelers and pilgrims.

“Gethsemane.” The name means oil press in Aramaic, the common language of the Jewish people.[3]  Olives were picked from the trees, crushed with a giant millstone (see 11.02.05.A), and then placed in flexible baskets.  Just as the weights of an olive press beam multiplies the pressure upon the olives (see 15.02.01.B), so the sins of humanity and the pending hour of death multiplied the pressure upon Jesus. It was in this orchard where Jesus experienced the incredible pressure of what was before Him: the official rejection by the Jewish leaders, the agony of the cross, the burden of taking the sins of humanity upon Himself, and finally death itself.

Centuries earlier, God told Moses and Joshua to establish six cities of refuge.  Anyone involved in an accidental killing could run to a city of refuge to escape blood revenge (Num. 35:6 ff.; Jos. 20), prior to trial.  The priests in the cities of refuge were to be the advocates for the accused before God and the people.  Now, however, the priests were the accusers of Jesus before God and remained hidden from the people.  They did not want anyone to learn of their evil deeds; there was no city of refuge for Jesus.

“My soul is swallowed up in sorrow.” The word sorrow means to be pressed upon,[4]  as to emphasize the extreme emotional pressure He experienced.  Jesus alludes to three verses in Psalm (42:5, 11; 43:5), thereby revealing for the first time, that these are Messianic prophecies. He did not quote them, but to the listeners, the message would soon be understood.

[4]. Fruchtenbaum, The Jewish Foundation of the Life of Messiah: Instructor’s Manual. Class 23, page 16.