IMAGERY OF VINE AND BRANCHES

1 “I am the true vine, and My Father is the vineyard keeper. 2 Every branch in Me that does not produce fruit He removes, and He prunes every branch that produces fruit so that it will produce more fruit. 3 You are already clean because of the word I have spoken to you. 4 Remain in Me, and I in you. Just as a branch is unable to produce fruit by itself unless it remains on the vine, so neither can you unless you remain in Me.

While salvation through Christ Jesus is free, if one is truly saved there will be clear evidence of that salvation. In this passage Jesus used the analogy of a vine branch to a believer. There are four interpretations of the unfruitful branches in verse 2:

The first and second viewpoints are traditional ones while the third and fourth viewpoints arose out of Calvinism.[1] While this is obviously a theological subject, it must be noted that James said that believers are not saved by works, but good works are proof of genuine faith (James 2:17).  The proverbial “bottom line” is that Jesus loves every believer to the point that He will administer discipline or correction when needed.

Jesus again expressed spiritual ideas with Hebraic pictures, as in this phrase, “I am the true vine.”  To this day, the grapevine remains a symbol of Israel as it did in the Hebrew Bible.[2]  The imagery was one in which God was the vine trunk and the Jews were the branches that received life from that trunk. Israel had been the vine, into which all people had to connect to worship God.  But when Jesus said, “I am the vine,” He clearly stated that He was the only way to God the Father and eternal life in heaven. In this profound statement, Jesus, in essence, stated that He was God.  Statements of this nature were extremely difficult for the disciples to accept, and impossible for anyone else to accept because all rabbinic teachings said that a man could not be God nor could God be a man. In essence, they could not comprehend the deity of Jesus. This is more than a symbolic identification with a vine; it is also a reflection of the famous “I am” statements of God that were given by Moses.  In essence, the seven “I am” statements of John’s gospel have a double meaning.[3]

The prophet Isaiah revealed God’s purpose for the nation with the figurative description of a vineyard (Isa. 5:1-7).  Israel was God’s chosen vineyard.  Therefore, it is only natural that Jesus would refer to His disciples in the same motif.  He told them that without Him, they could do nothing, but with Him, they could perform greater miracles than He had performed.  In essence, Jesus was and continues to be the vine while the apostles, disciples, and believers were the branches. They were “yoked” together to produce fruit.

The disciples could not miss the imagery of the conversation they had with Jesus in the temple. Over the entrance door was a large grapevine, carved in stone. It had been covered with gold, paid for by wealthy contributors who had their names inscribed in the gold leaves.[4]  The vine was an object of incredible beauty.  However, the aristocratic leadership of Israel had become an unfruitful vine.  Their limited evangelistic efforts did win converts, but those converts quickly became equally unfruitful.  That is why Jesus referred to Himself as the “true” vine.

On an interesting side note, the term “vineyard keeper” is better translated as “gardener” as it is translated from the Greek term georgos, meaning farmer. It is God, the Farmer, who prunes (meaning to “cleanse”) the vine from dead and useless branches.[5]

“Throw them into the fire, and they are burned.”  Jesus clearly spoke of eternal death for those who refused His words and work.[6] He is the only way, the only life, and the only truth that leads to eternal life.  There are two kinds of people Jesus was probably thinking of in this discussion.

“You produce much fruit.”  The difficulty with this passage in John 15:8 is the interpretation of the word “fruit.” The Western cultural understanding suggests work or employment that would advance the Kingdom of God. And while that is an honorable goal, it is not the meaning of this term. Rather, it is a reference to the fruit of the Spirit, as further described in Galatians 5:22-23 as “love, joy, peace, patience, kindness, goodness, faithfulness, gentleness, and self-control” (cf. Eph. 5:9; Phl. 1:11).   This fruit is the major element in one’s life, whereby he becomes renewed in the image of God that was nearly destroyed at the fall of humanity in the Garden of Eden. This fruit cannot be self-produced; it can only come from above. As the Holy Spirit prunes the lives of the believers, new spiritual growth can come forth to produce this fruit (cf. Jn. 15:6; 1 Cor. 3:11) and in this way the Father honored and glorified.

Jesus spoke these words as they looked upon the temple and saw the colossal golden vine and branches that decorated the temple gates.  The origin of the vine is also from Isaiah and it became the focal point of the conversation. Josephus described the temple symbolism:

As to the holy house itself, which was placed in the midst of the inmost court, that most sacred part of the temple, it was ascended to by twelve steps; and in front its height and breadth were equal, and each a hundred cubits…. Its first gate was seventy cubits high and twenty-five cubits broad, but this gate had no doors for it represented the universal visibility of heaven, and that it cannot be excluded from any place.  Its front was covered with gold all over and through it the first part of the house that was more inward did all of it appear; which, as it was very large, so did all the parts about the more inward gate appear to shine to those that saw them.  But then as the entire house was divided into two parts within, it was only the first part of it that was open to our view.  Its height extended all along to ninety cubits in height, and its length was fifty cubits, and its breadth twenty.  But that gate which was at this end of the first part of the house was, as we have already observed, all covered with gold, as was its whole wall about it.  It had also golden vines above it from which clusters of grapes hung as tall as a man’s height; but then this house, as it was divided into two parts: the inner part was lower than the appearance of the outer, and had golden doors of twenty-five cubits altitude, and six in breadth.   But before these doors there was a veil of equal largeness with the doors.  It was a Babylonian curtain embroidered with blue and fine linen, and scarlet, and purple, and of a contexture that was truly wonderful. Nor was this mixture of colors without its mystical interpretation but was a kind of image of the universe.  For by the scarlet there seemed to be enigmatically signified fire, by the fine flax the earth, by the blue the air, and by the purple the sea; two of them having their colors this foundation of this resemblance.  But the fine flax and the purple have their own origin for that foundation, the earth producing the one and the sea the other.  This curtain had also embroidered upon it all that was mystical in the heavens, excepting that of the twelve signs representing living creatures.[7] 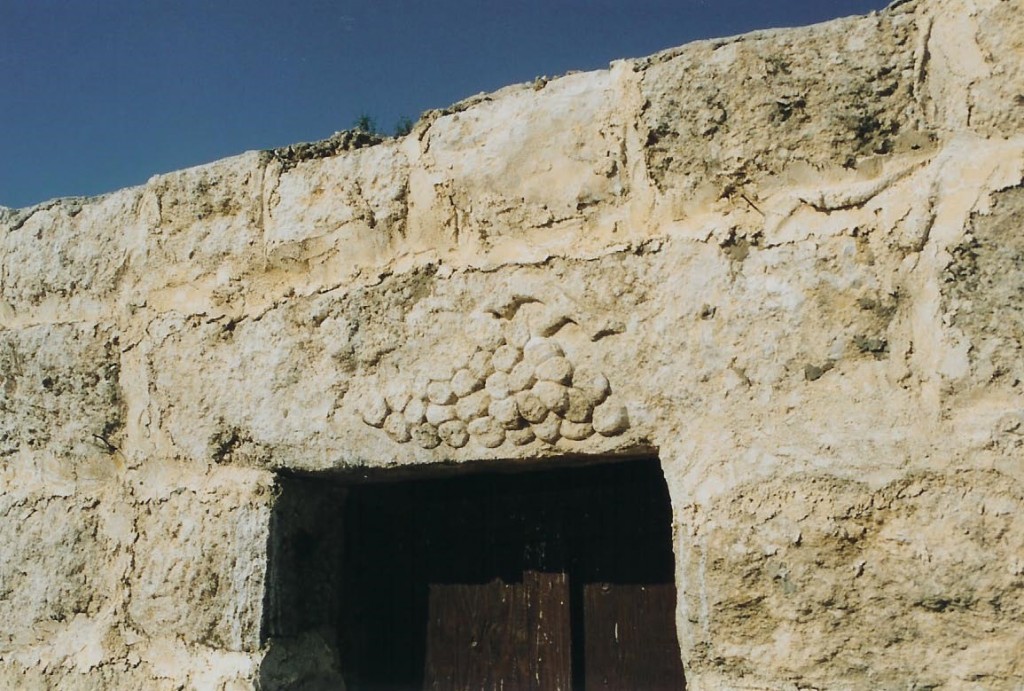 15.01.01.A. RELIEF CARVING OF VINE AND BRANCHES. Vine and branches has long been an icon for Israel, as well as a promise of prosperity by God.  This carved stone door header of a home was found near Capernaum. Photograph by the author.

In another book, the first century historian said these words concerning the decorative vines:

The temple had doors also at the entrance, and lintels over them, of the same height as the temple itself.  They were adorned with embroidered veils, with their flowers of purple, and pillars interwoven: and over these, but under the crown-work, was spread out a golden vine, with its branches hanging down from a great height, the largeness and fine workmanship of which was a surprising sight to the spectators, to see what vast materials there were and with what great skill the workmanship was done.

The faithful rabbis, who recorded the description of the temple and its services, wrote this description:

A golden vine stood over the entrance to the Sanctuary, trained over posts; and whosoever gave a leaf, a berry, or a cluster as a freewill offering, he brought it and [the priests] hung it thereon.

Incidentally, the crown-work was a memorial for four individuals involved with the construction of the temple (Zech. 6:14).  Every time they entered the temple they saw the vine carved in its gates, the symbol of true Israel.  How fitting then that Jesus said He was that vine, not only symbolically, but also concerning the reality of the believer to Himself. Jesus is the source of life for all who desire it.

[7]. The twelve signs represent the signs of the Zodiac.