Mt. 1 When Jesus had finished saying all this, He told His disciples, 2 “You know that the Passover takes place after two days, and the Son of Man will be handed over to be crucified.”

3 Then the chief priests and the elders of the people assembled in the palace of the high priest, who was called Caiaphas, 4 and they conspired to arrest Jesus in a treacherous way and kill Him. 5 “Not during the festival,” they said, “so there won’t be rioting among the people.”

Caiaphas and the chief priests and the elders made definite plans not to execute Jesus during Passover, but a conspiracy was in progress. The plan was to arrest Him quietly by stealth and kill Him quietly “so there won’t be rioting among the people.” Why would there have been rioting among the people? Because they wanted to make Jesus their king and they had heard rumors that the religious establishment wanted to kill him. So why do the Scriptures say later that all the people cried “crucify Him, crucify Him?” (Mt. 27:22-23; Lk. 23:20). They didn’t, as will be explained.

The popularity of Jesus increased with intensity.  Certainly the disciples were looking forward with excitement and anticipation of what He would do next, namely, if He would declare Himself as the messiah. Clearly, the religious leaders acknowledged His immense popularity to the point that they were fearful of Him. Tradition said the messiah would declare himself as such on the temple steps, which is why the Romans stationed soldiers in the Antonia Fortress that was located adjacent to the temple. 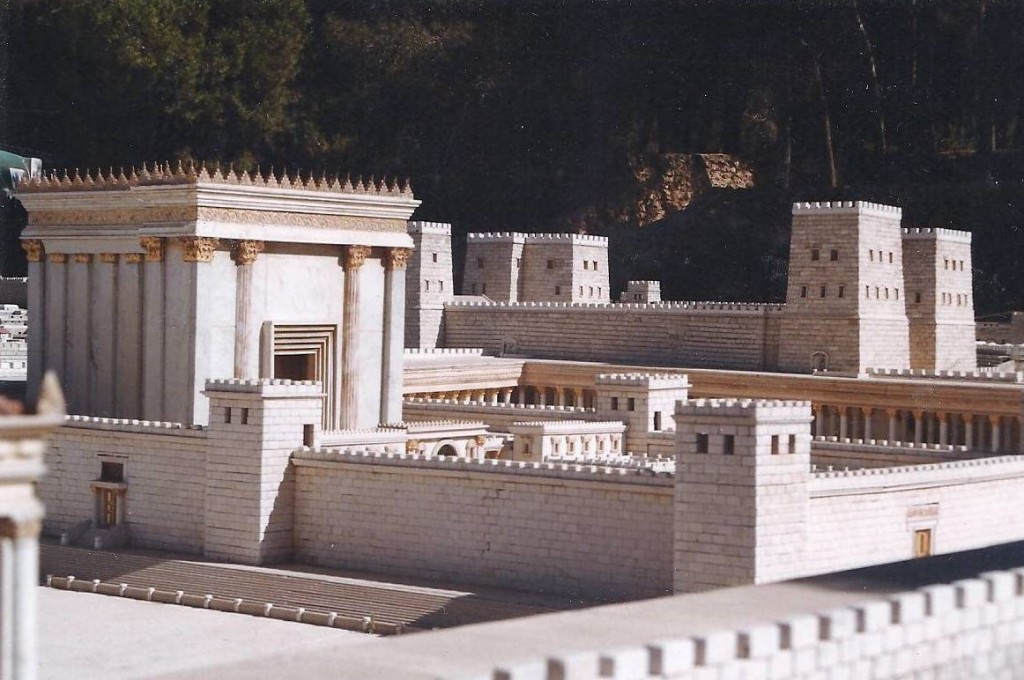 14.01.11.A. THE TEMPLE AND ANTONIA FORTRESS.  In this model, the temple is in the foreground and the Antonia Fortress is shown behind and to the right of the temple. The Praetorian Guard was always stationed in the Fortress in the event someone should announce that he was the messiah who would deliver the people from Roman oppression. Photographed in 1998 by the author.

Herein lays another irony in the life of Jesus:  When Jesus was twelve years old, the rabbis were full of wonder at the boy-genius who challenged them on the temple steps. Now He was the man who revealed their corruption and, hence, they wanted to kill Him.

Many believed if Jesus was not the messiah, then He most surely was a prophet.  They had not heard from a prophet for nearly four centuries until John the Baptist. Now here was one in their midst more powerful and stunning than any previous prophet.  His death by their leadership would most certainly cause an uprising, as was clearly attested to by the Pharisees and Sadducees.

In Matthew 26:6-13 and Mark 14:3-9 Simon is a leper, but in Luke 7:37-38 he is the Pharisee.  John (12:1-8) did not give him a name, but the account seems to have taken place in the home of Mary, Martha and Lazarus.[1]  It should be noted that the name Simon, like Jesus, was a common name and there are ten Simons in the New Testament. The real issue is whether the story recorded by Luke is the same as recorded by the other gospel writers.  There is a good possibility that these are two different but similar events.  After all, Jesus performed so many miracles that all the books could not have recorded every one of them.

According to one of the Dead Sea Scrolls,[2] Bethany and Bethpage were two villages east of Jerusalem, where lepers lived.  Because of their diseases, known as “impurities,” they were not permitted to enter the holy structure (Lev. 13:45-46).  However, the location of Bethany is higher than the temple area, which gave them some consolation as they could look into the holy place and think of a future time with God.  This may be why Jesus brought comfort to them, as evidenced when He enjoyed a meal with Simon the leper.[3]