Mt. 15a Then the Pharisees went and plotted how to trap Him by what He said,

Lk. 20  [and] sent spies who pretended to be righteous, so they could catch Him in what He said, to hand Him over to the governor’s rule and authority. 21 They questioned Him, “Teacher, we know that You speak and teach correctly, and You don’t show partiality, but teach truthfully the way of God. 22 Is it lawful for us to pay taxes to Caesar or not?”

23 But detecting their craftiness, He said to them, 24 “Show Me a denarius. Whose image and inscription does it have?”

26 They were not able to catch Him in what He said in public, and being amazed at His answer, they became silent.

The subject of this discussion originated in the year A.D. 6, when a new poll tax (Mt. 9:9; 10:3) was instituted for the benefit of the Roman treasury.[1]  The Jews were already reduced to economic slavery by Herod the Great,[2] and the new tax made life even worse.  The payment of taxes was seen by patriotic Jews as a confirmation that people gave authority to the Romans to rule over them.

In response, a Zealot by the name of Judas the Galilean declared that it was sacrilege for God’s chosen people to pay taxes to a pagan ruler.  So he quickly gathered some followers and started a revolt.  Josephus said the following of this matter:

There was one Judas, a Gaulonite[3] of a city whose name is Gamala, who, taking with him a Saddock, a Pharisee, because zealous to draw them to a revolt, who both said that this taxation was no better than an introduction to slavery, and exhorted the nation to assert their liberty.

So men received what they said with pleasure, and this bold attempt proceeded to a great height.  All sorts of misfortunes also sprang from these men, and the nation was infected with this doctrine to an incredible degree. One violent war came upon us after another, and we lost our friends who used to alleviate our pains; there were also very great robberies and murders of our principal men.

This area was under the rule of Caponius, whose seat of authority was in Damascus.  But Caponius was a poor ruler, motivated by greed and corruption and consequently, he was called back to Rome to give an account of his administration. To resolve the problems, Rome asked Quirinius to serve a governor-general and take a population census for these reasons:

The rebellion that Judas and the Zealots started was quickly crushed.  However, the theological issue that Judas popularized continued (see 03.06.14). Jesus was about ten years old when the rebellion was crushed, so by the time His ministry began, the matter had become explosive. He defused it gently.[4]

To add insult to injury, it was the common opinion that to own a coin with the image of Caesar, was to affirm loyalty to him and, therefore, disown loyalty to God.[5] Furthermore, some Roman coins had the inscription Roma Perpetua meaning Rome Perpetual, or Roma Aeterna, meaning Rome Eternal.[6]

The coin that was shown to Jesus could have been minted at a number of places, but not in the Jewish provinces of Judea, Perea, or Galilee. The tetrarch Herod Philip was the first local monarch to introduce an image of Caesar on Jewish coins.[7]  But he was so far north of Jerusalem, near Mount Hermon, that there was little effective opposition.

Concerning the direct issue of taxes and the coin, if Jesus would have responded with an affirmative answer that taxes had be paid, He would have lost his public following and appeared to have abandoned Israel.  If He had said that taxes should not be paid, He would have been brought before the imperial courts for subversive activities and treason. The religious leaders knew the Romans would subject them to harsh penalties for unpaid taxes.  Jesus separated legal and spiritual obligations, but did not avoid or negate them. In this discussion He clearly indicated that Jews were to honor both civil government and God, insofar as the secular authority does not clash with the believer’s loyalty to God.  Throughout His entire ministry, He never attacked the policies of the Romans.  The irony is that if Jews had faithfully given their dues and allegiance to God, they would never have been subjects of Roman nor any other form of dictatorship.[8]

“Spies who pretended to be righteous.”  These spies were the classic hypocrites,[9]   as Luke used the Greek word hypokrinomenoi related to the root word of hypokrites, meaning actor and translated as hypocrite.[10] Here the focus is not so much on the spiritual condition of these individuals, as their attempt to induce a false impression as they plotted against Jesus.

“Is it lawful for us to pay taxes to Caesar or not?” While the Romans had reduced the Jews to economic slaves, they did, in fact, benefit from Roman military protection and were permitted to practice their religion as they wished. To answer the question, Jesus said that they ought to pay the civil taxes, while at the same time obeying God.

The question is also significant in light of the fact that Josephus says that more than six thousand Pharisees refused to take the oath of allegiance to Herod and Caesar.[11] The motives of those who challenged Jesus must have been questioned by the bystanders who witnessed the discussion.

The Romans contracted taxes with two kinds of tax collectors and many kinds of taxes.[12]

The question in this discussion (Mt. 22:15, etc.) has nothing to do with the kind of tax, but the image on the coin with which the tax was paid. That was problematic for these reasons:

The image of Caesar with an inscription that deified him as a god was so offensive that many refused to carry it, for they believed holding ownership would be equal to agreeing with the inscription.  It was deemed by some Pharisees to be a violation of the second commandment to own one – and as such, anyone who had a denarius was said to be “unrighteous.” Therefore, in an attempt to appease the Jews, the Romans minted some coins without the image of Caesar.[14] 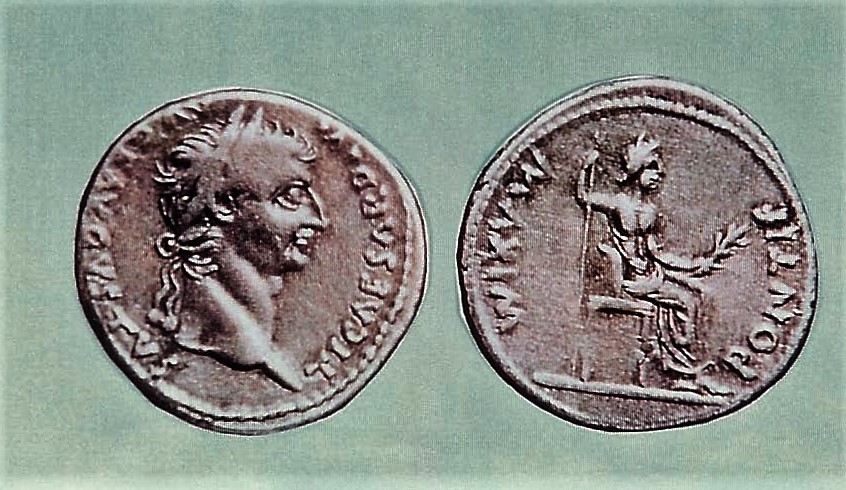 13.04.02A. ROMAN DENARIUS.  The Roman silver coin that offended the Jews has a portrait of Tiberius Caesar with the inscription “TI CAESAR DIVI AUG F AUGUSTUS,” meaning “Tiberius Caesar, son of the divine Augustus.”[15] A denarius was the minimum daily income needed to sustain a small family.

Jesus once again spoke clearly concerning the Kingdom of God and affirmed that He was neither a supporter of Rome nor a Zealot against Rome.  Neither those who desired to accuse Him of being a traitor nor those who were looking for a military viceroy would find their answer in Him, but only those who were seeking God would find Him.  This statement, while in response to a monetary issue, had implications for all aspects of life; they spoke of coins and taxes but Jesus wanted His listeners to apply all aspects of life to the Kingdom of God.

Coinage had significant influences upon people for the following reasons:

“Give back to Caesar the things that are Caesar’s and to God the things that are God’s.” Jesus said that to give God what belongs to God could be nothing less than His supreme creation, human life. Jesus spoke little of currency in this discourse, but rather, He spoke of the dedication of life to either Caesar or to God. Money, of course, would follow either dedication. Tertullian reflected this idea when he said:

Give to Caesar what is Caesar’s – his image on the coin; give to God what is God’s – His image in man, yourself.

The biblical observance continues today, as Israeli coins do not have images on them.  An “image” was defined as a likeness of a human or animal and was associated with the word “graven” (cf. Ex. 20:4).  Hence, other images such as a lily on the capital of an ancient column are acceptable.  Paper currency and postage stamps, however, do not have a three-dimensional surface and, therefore, have pictures of Israeli heroes and great leaders. Ironically, secular Israelis today demonstrate a greater respect for the biblical commandment than did the Sadducees.

[3]. According to Whiston, ed., Gaulonite was the term Josephus used for a resident of Gamala, although Judas was probably originally from Gaulonitis on the eastern side of the Jordan River, and moved to Gamala to join or lead a nationalistic movement.