PARABLE OF THE HOUSEHOLDER AND THE ONLY SON

Mk. 1 Then He began to speak to them in parables: “A man planted a vineyard, put a fence around it, dug out a pit for a winepress, and built a watchtower. Then he leased it to tenant farmers and went away.

he sent a slave to the farmers

to collect some of the fruit of the vineyard from the farmers.

3 But they took him, beat him, and

sent him away empty-handed.

4 Again he sent another slave to them, and

they hit him on the head and treated him shamefully.

5 Then he sent another,

and they killed that one.

He also sent many others;

they beat some and they killed some.

6 “He still had one to send, a beloved son. Finally he sent him to them, saying, ‘They will respect my son.’

7 “But those tenant farmers said among themselves,

‘This is the heir.

and the inheritance will be ours!’

8 So they seized him,

threw him out of the vineyard.

9 “Therefore, what will the owner of the vineyard do? He will come and destroy the farmers and give the vineyard to others.

This parable has been a favorite instrument to prove the doctrine of replacement theology.[1]  But with that there is a serious hermeneutical problem. Parables were never to be used for establishing doctrine, not in biblical times and not today.  This parable is one of special interest because Bible translators and commentators have given this parable a number of different titles, based on their interpretation of its meaning.

Titles give an understanding of what a parable is about, but sometimes titles also shade the meaning of a parable. Using the title Kingdom of God with this parable may be a leading directive as to how it is interpreted.  However, if the title is The Parable of the Murdered Son, then the focus of the parable points toward the murdered son. On the other hand, if the title is about the wicked tenants, it will focus the attention of the reader on the tenants. For example, the Thompson Chain Reference Bible, NAS edition, titles it the Parable of the Landowner, but has marginal notes with references to the rejection of Jesus, Israel being cut off, the Gentiles, and it clearly gives the implication of the Gentiles replacing the Jews. On the other hand, if it would have the words Wicked Tenants then the tenant farmers become the focus of the story.  However, in its cultural context, the vineyard owner is the true hero and focus of the story.[2]  Furthermore, it has been often been stated herein that Jesus often used persons and events of history as the backdrop of some parables and stories. In this case, the parable is a retelling of Isaiah 5:1-6. It is this author’s opinion that the title should be The Parable of the Only Son,[3] as the focus of all parables point to Jesus and His Kingdom of God.

In this case, Mark was rather detailed in the description of the man who established the vineyard.  In essence, the man made a huge investment.  Not only did he plant the grape seedlings, but he also placed a fence around it to keep out wild pigs (boars) and thieves, he built a wine press that clearly indicates that he expected to receive the rewards of his investment. And finally, he built a watchtower to enable his servants to do their job well and they would also have a comfortable housing. For many centuries towers[4] served two purposes.

The listeners were very much acquainted with the agricultural process and Jesus made the connection of that process to those who desired to kill him – and as such this parable has a single theme focused on the Sadducees and leading Pharisees. The story itself is somewhat complicated with vineyards, an absentee property owner, and rebellious tenant farmers.  Furthermore, the phrase “A man planted a vineyard” is reflective of Isaiah 5:1-2 where the song of the vineyard is the image of Israel.  Jesus, therefore, wove the message of Isaiah into His parable, making it more complex than usual.  To clarify the parable, note the following list of characters:

It is evident that a landowner had accomplished the sizeable task of establishing a functional vineyard that had all of the necessary equipment for the production of wine.  After he placed several farmers in charge, he went on a journey.  The rent was generally collected by a business manager.  But once the farmers were in charge they decided to take ownership of the vineyard.  When the owner sent his servants to the vineyard, the farmers killed them.  The imagery could not be missed by the Pharisees. They knew that in previous years their forefathers killed numerous prophets sent by God.

The passage clearly says, “This is the heir.”  It does not say, “He claims to be the heir.” The leading Pharisees and Sadducees enjoyed the “kingdom” they had which was of their own making and Jesus was clearly a threat. Furthermore, in the parable, Jesus said “this is the heir,” because He knew that they had correctly recognized Him – the Pharisees and Sadducees knew He was the Messiah.

When the tenant farmers said that “the inheritance will be ours” if they killed the owner’s son, they were legally right in terms of inheritance laws of the time.  An ancient law stated that if an heir did not claim his land, it could be declared “ownerless” and therefore, anyone could claim it.[5] This was typical business law throughout the ancient world, as evidence by a hereditary lease of a vineyard discovered by archaeologists in the early twentieth century in ancient Parthia.[6] 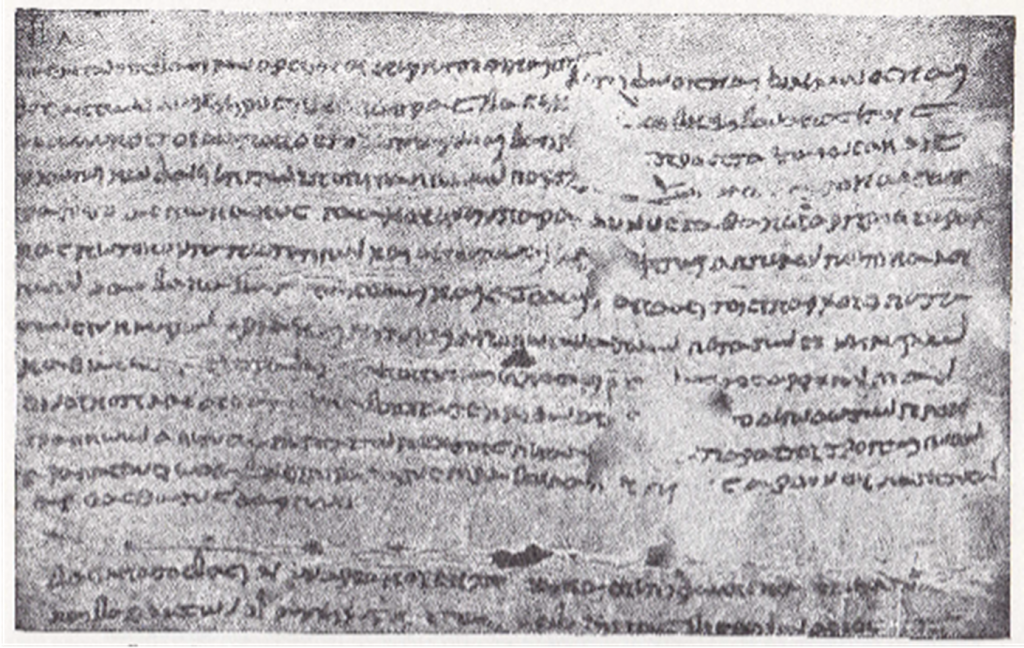 13.03.04.A. HEREDITARY LEASE OF A VINEYARD. The legal document dated to 22-21 B.C., was written on Parchment and reflects the conditions of Mark 12:1-9 and Luke 20:9-16. It is from Kopanis, in the Kingdom of Parthia, and is evidence that some of the legal contracts and proceedings Jesus used in His parables were common to all nearby cultures.

In the parable the landowner sent one servant after another. Each one was either ill-treated or killed.  Finally, in order to insure the rent would be paid, the landowner sent the son whom he loved. In both the Greek and Hebrew, the son is described as the “beloved son,” which is equal to “the only son.” This is a significant point and shows the emphasis.  Jesus was speaking of Himself and this is the theme of the parable. Immediately following this dialog, Jesus speaks of Himself as a stone (see below).  The business managers who were sent are equal to the Old Testament prophets who were sent to the children of Israel.  Some tenants were beaten, while others were killed in real life; some prophets were beaten while others were killed. Only a few ever enjoyed the honor they deserved.  Just as the only son was killed by the tenants, herein Jesus predicted His own death.

“Destroy the farmers and give the vineyard to others.” This phrase has generally been interpreted to mean that the covenant promises that were given to national Israel would now be transferred permanently to the church, and the Jews would be destroyed.[7] That is hardly the case. Rather, the divine authority given to the Jews to have the Word of God produce fruit would be transferred to the Gentiles. The irony is that Jesus told them He knew they were going to kill Him. However, their hatred was so great they failed to recognize the prophetic insight of their intentions.  One must wonder how blind these men were, having been witnesses to multiple miracles, yet refusing to believe in Jesus.  The phrase was an announcement of a two-fold judgment.

Clearly, this had a reference to the Gentiles as the heirs of the Kingdom of God. The parable angered the Pharisees and Jesus responded before beginning the parable of the most important wedding banquet. There are two possible interpretations to this parable:

While the first question has historically been affirmed, there are a growing number of scholars who affirm the second with the theme being on the “only son.”[8] Since parables point toward Jesus and His Kingdom of God, the only viable interpretation is the “only son.”

Finally, this parable is an example of what theologians call “practical atheism.” The tenants, just as the Jewish leaders of Israel, said they believed in God and may have even prayed and discussed life in religious terms.  However, their conduct demonstrated that they had no “heart-belief” in God; no desire to live life according to His divine plan – hence – they were “practical atheists.”[9]

[1]. See definition in Glossary in Appendix 26; A rule of hermeneutics is that parables are not to be used for the establishment of doctrines.

[3]. This title was originally suggested by Brad H. Young.

[6]. Deissmann, Light from the Ancient East. 33. Artifact in the British Museum.

[7]. This is a core element of replacement theology.  See “Replacement Theology” in Appendix 26 for more details.

[9]. Lang, Know the Words of Jesus. 341. Another term for “practical athiests” is “secular Christians.” Obviously both terms are oxymorons.