12 The next day when they came out from Bethany, He was hungry. 13 After seeing in the distance a fig tree with leaves, He went to find out if there was anything on it. When He came to it, He found nothing but leaves, because it was not the season for figs. 14 He said to it, “May no one ever eat fruit from you again!” And His disciples heard it.

The fig tree was one of the historic symbols of Israel throughout the centuries (Hos. 9:10; Na. 3:12);[1] Israel – a nation that God brought forth for one purpose – to bring forth the Anointed One who was Jesus.  For generations, rabbis would sit under the fig tree and teach their students the Torah.  As the students would “eat the word of Scripture,” so they would find some fruit to eat on the tree most of the year.  In a similar manner, Israel was called to instruct the nations of the world about the covenants of God.  This imagery was used by Amos (Ch. 8) when God referred to His people as the “summer fruit” that would be destroyed.[2] The tree cursed by Jesus had an abundance of leaves and gave the appearance of being fruitful, whereas in reality, it was a barren tree.  Israel was the same.  The religious nation gave the appearance of being full of life but was, in fact, a barren people.

“A fig tree with leaves.”  The story of the fig tree (ficus carica) is a story of hope.[3]   Modern readers who are not acquainted with the land of Israel often question why an innocent tree was cursed, but the tree may not have been quite as innocent as they may have thought.  It normally takes three years for a fig tree to mature and produce fruit, after which it has three seasons of fig production as follows.

The difficulty with this passage is that Jesus cursed the fruit tree for not having fruit, when Mark said that it was not supposed to have fruit (Mk. 11:13b).  So why was the tree cursed for being a normal fig tree?  There are two interpretations.

In the Old Testament, the tree was associated with God’s promises of prosperity as well as His prophetic warnings.[6]  While both the early fruit and later fruit are figs, the taste of each is clearly different. The early fruit appears only for a brief period and clusters of the later fruit ripen throughout most of the year. It is the only tree in the Middle East where, in early spring, the early fruit appears before the leaves.  Mark referred to the latter fruit, since this is the fruit that would have been the preferred fruit enjoyed by travelers. Fig trees were planted along roads for the benefit of the traveling public and its fruit was considered to be common property.[7]

The accounts of the fig tree are placed on either side of the second cleansing of the temple for symbolic reasons.  Not only did the temple leadership fail to represent God to the Jewish and Gentile people, but they were also about to condemn the Messiah.  The fig tree as a prophetic event had full significance in A.D. 70 when the temple was destroyed and judgment fell upon the Jewish nation.   When Jesus spoke these words, He announced that judgment was coming upon the spiritually dead religious leaders. The following three parables repeat the theme:

One of God’s divine principles is that men always be as honest as possible. His hatred for hypocrisy[8] was demonstrated in the cursing of the fig tree. The call for honesty was later quite emphatic when two people, Ananias and Sapphira, made false claims concerning the funds received from the sale of land and met sudden death (Acts 5:1-11).

Yet another law forbade the cutting down of fruit trees except for special circumstances (Deut. 20:19-20), namely, for the lack of producing fruit. In this case, both the fig tree and the nation it represented were condemned according to the Old Testament law. The message was clearly understood because the imagery of a plant to depict God’s people is common in Judaism.[9] The following discussion (cf. Mt. 24) took place as Jesus was on the Mount of Olives with all of His disciples and there He gave His famous Olivet Discourse. According to the Apocalypse of Peter, the disciple, Peter, recorded the following:

And I, Peter, answered and said to him, “Explain to me concerning the fig tree, and how shall we perceive it, for throughout all its days does the fig tree sprout and every year it brings forth its fruit (and)[10] for its master.  What does the parable of the fig tree mean?  We do not understand.”

And the Master answered and said unto me, “Do you not understand that the fig tree is the house of Israel?  Even as a man had planted a fig tree in his garden and it brought forth no fruit, and he looked for its fruit for many years.  When he did not find it he said to the keeper of his garden ‘Uproot the tree that our land may not be unfruitful for us.’”

While the Apocalypse has some Hellenistic overtones, both Clement of Alexandria[12] and Eusebius, a church father and historian of a later period,[13]  shared the unknown author’s opinion. Clearly, the phrase “fig tree” refers to the nation or house of Israel and is, therefore, preserved by more than one credible witness within two generations of Jesus.

“The fig tree is the house of Israel.” The children of Abraham, Isaac, and Jacob are referred to symbolically in the form of three trees – each one for a specific purpose.[14]

Finally, while national Israel was cursed, obviously God’s love for Jewish individuals continues. In Acts 1:8 the disciples were told to go and preach the Kingdom of God first to the Jewish people, then to the Samaritans, and then to the far corners of the world.  If every segment of the Jewish people was cursed, then obviously the passage in Acts would have been written differently. Notice that in Romans 11:17-27 is the “Parable of the Two Olive Trees” that is additional evidence that Israel was not completely cursed. The two olive trees represent the Gentiles and Jews who come to faith in Christ Jesus. 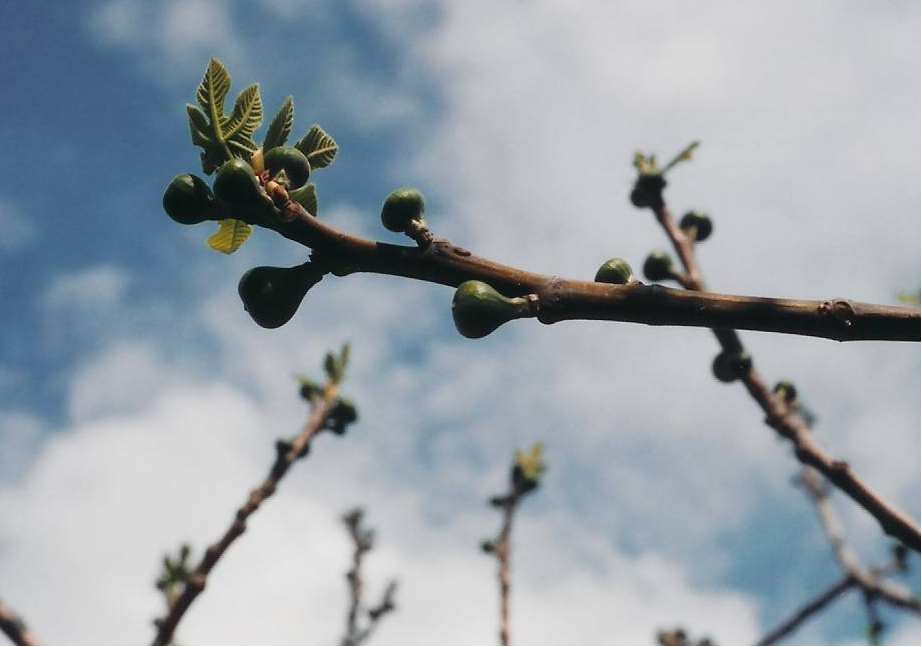 13.02.01.A. THE EARLY FRUIT OF THE FIG TREE. The fig tree (ficus carica) was symbolic of both the king and people of Israel since the early days of the judges.[16] Jesus cursed the fig tree, symbolic of the curse that would come and the land would be destroyed and Jews from their homeland.  Photograph by the author.

[3]. Lightfoot, A Commentary on the New Testament from the Talmud and Hebraica. 1:232.

[11]. Schneemelcher, “Apocalypse of Peter.” New Testament Apocrypha Vol. 2.  This passage was written in King James English and has been slightly modified by this writer for an easier reading by a modern audience. Nearly all scholars believe that the author was someone other than Peter; someone who recorded some events, embellished a few others, and then assigned Peter’s name to the document. It certainly should not be considered equal to the inspired text. See video by Dr. Doug Finkbinder 02.02.01.V.

[14] Larkin, “The Three Trees to which Israel is compared in the Scriptures.” Dispensational Truth or God’s Plan and Purpose in the Ages. 4th 29:153-57.