A LARGE CROWD CALLS JESUS “THE KING OF ISRAEL”

Jn. 12 The next day, when the large crowd that had come to the festival heard that Jesus was coming to Jerusalem, 13a they took palm branches and went out to meet Him.

Mk. 9 Then those who went ahead and those who followed kept shouting:

He who comes in the name

of the Lord is the blessed One!

of our father David is blessed!

Jn.  13b He who comes in the name of the Lord is the blessed One —the King of Israel!”

Thousands came for the Passover celebration. Josephus recorded that the population of the Holy City increased to between two and three million people.[1]  Although recent scholarship has documented that his population estimates are somewhat exaggerated, it is well known that a very “large crowd” packed into Jerusalem each year at this time.[2]

“Palm branches … Hosanna” For centuries palm branches[3] were used in the Feast of Tabernacles, a festival that occurs six months later in the fall of the year. However, the presentation of palm branches was common practice in all ancient Middle Eastern cultures that symbolized,

As Jesus entered the city, the crowd shouted, “Hosanna,” (Gk. hosanna 5614)[4] a Greek praise word derived from the Hebrew Hoshana.[5]  It originally loosely meant, Hallelujah, and Sabbath.[6] However, since the Maccabean Rebellion, it had been redefined with a nationalistic meaning: deliver us, save us, and give us our freedom – a distinctive messianic message of political freedom. The religious leaders feared such shouting would bring the Roman guards, so they told Jesus to keep His followers quiet.[7]  The people must have anticipated that Jesus would become their king – one who would overthrow the Romans – because they had no other reason to obtain palm branches. The request would not have been made if the people were merely praising God, but their palm branches signified political independence.[8]

In the days preceding a festival, as pilgrims entered the city they sang psalms.  One such Psalm, 118, has the word, “hosanna” (118:25-26) that was sung while waving palm branches praising God for victories over their enemies.[9] Ironically, later when Jesus and His disciples closed their Passover service, they would sing this same hosanna psalm. According to Jewish writers, this was sung in the temple at Passover,[10] but sung on the way going to the temple at the feast of Tabernacles.[11]

The use of palm branches to welcome a king was a long tradition that reflected nationalistic pride and aspirations.[12] For example, in the Old Testament era, much as today, when a king traveled throughout his kingdom, a herald would first go out and announce the coming of the monarch.  The people responded by lining the streets to catch a glimpse of their royalty, whom they perceived to be a god.  At the time of his arrival, the king would ride into town on horseback with a procession of military units before and after him.  The crowds placed palm branches on the road before him to signify his position as their king.  The procession eventually became known as a “parade.”[13]  The greeting that Jesus received was identical to what many other men of royalty and high honor received in the ancient Middle East.  Note the following examples:

Each man quickly took his garment and put it under Jehu on the bare steps. They blew the ram’s horn and proclaimed, “Jehu is king!”

This same account was paraphrased by Josephus, who said,

…And when they were eager about the matter, and desired he (Elisha) would tell them, he answered that God had said he had chosen him (Jehu) to be king over the multitude. When he had said this, every one of them put off his garment and strewed it under him, and blew with trumpets, and gave notice that Jehu was king.

They celebrated it for eight days with rejoicing . . . Therefore, carrying ivy-wreathed wands and beautiful branches and also fronds of palm, they offered hymns of thanksgiving to him who had given success to the purifying of his own holy place.

With thanksgiving, and branches of palm trees, and with harps, and cymbals, and with viols,[20] and hymns, and songs, because a great enemy was destroyed out of Israel.

After the successful Maccabean Revolt, Israel enjoyed a century of political independence but it was full of political corruption and strife.  During this time, Alexander Jannaeus (d. 78 B.C.) minted coins that featured the palm branch and the words, “Yehonatan the king.”  The palm branch was associated with kingship.[21] 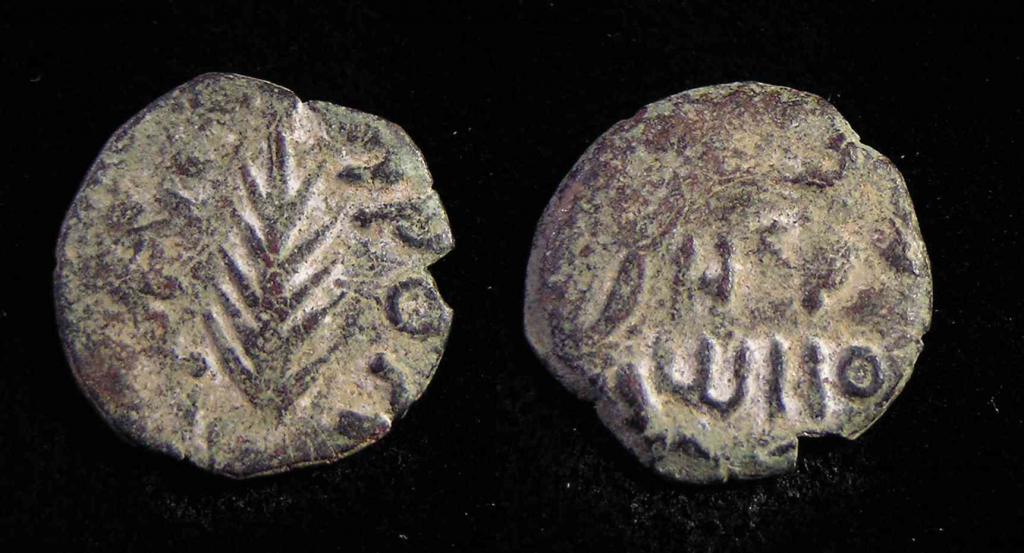 13.01.04.A.  COIN BY FESTUS WITH PALM BRANCH. A Jewish coin with palm branch struck by Porcius Festus in A.D. 60 under the reign of Nero. LEFT: The obverse (front) depicts a palm branch. RIGHT: The reverse scene has the legend and a wreath.

Finally, eschatologically, the palm branch has a future function when a great multitude, one that will be too massive to count, will wave palm branches before Jesus in heaven.  They will shout, “Salvation belongs to our God” (Rev. 7:9-10). To the first century Jews, the palm branch was not a mystery; it was the symbol of victory. Therefore, the obvious question is, why didn’t the Romans and Herodian Dynasty see Jesus as a threat?  The answer is that they observed Him for more than three years, during which time He never spoke of violence nor did He speak against the dominating Roman occupation.  Would they have seen Jesus as potential threat, He would never have had the opportunity to ride into Jerusalem.

“He who comes in the name of the Lord is the blessed One!” The rabbis taught that this phrase was the Messianic greeting; part of the official greeting all people would give the Messiah when He comes.  It is based on Psalm 118:22-27.[22]  Now they were witnessing the people greeting Jesus with it. Undoubtedly, this struck terror in the hearts of the religious leaders, especially when they called Jesus “the king of Israel.”[23] This title again demonstrates that the people firmly believed that Jesus would deliver them from Roman oppression. Incidentally, some scholars believe that the phrase, “blessed is he who comes in the name of the Lord.” will be repeated at the return of the Messiah.   The term blessed in Hebrew is baruk and in Greek is makarious. The word means to praise God with a sense of happiness and joy upon man.[24] More specifically, it refers to a quality of spirituality that is already present.[25]

Ironically, the day the crowds waived palm branches before Jesus was the same day – the Sunday before Passover – they selected their sacrificial lambs.  The head of every family entered the city and purchased the lamb that was to be sacrificed on the following Friday at Passover.  This was the same day that Jesus entered the city because He was the Lamb chosen of God.  The popularity that was in His favor would never be lost by the common people.  Yet while the religious leaders were preparing to sacrifice thousands of lambs for the people, they were also planning to kill the Lamb of God.

When examining the life and ministry of Jesus and how the religious leaders responded, the development of their negative attitude can be traced as follows:

Previously, the Jewish leadership had many reasons to kill Jesus.[26] Now they had three more.

[3]. Mishnah, Bikkurim 1:3; 1 Macc. 13:51; Jn. 1:13; Palm trees grew in Jerusalem as ornamental trees, since they do not bear edible fruit at that altitude (about 2600 ft. above sea level) and in that climate See also Kloner and Zissu. The Necropolis of Jerusalem in the Second Temple Period. 35.

[5]. Fruchtenbaum, The Jewish Foundation of the Life of Messiah: Instructor’s Manual. Class 19, page 13.

[19]. First and 2nd Maccabees belong to a classification of extra-biblical books known as the Apocrypha. These two literary works are deemed highly reliable historically. See 02.02.03 “Apocrypha” for more information.

[20]. The identity of the musical instruments referred to as “viols” is uncertain, since the viol was developed in Italy around 1510 and the violin about twenty years later. Source: http://www.diabolus.org/guide/viols.htm. Retrieved August 3, 2013. However, another website,  http://www.atelierdes7cordes.com/profile%20gb.html.shows bas-relief images showing musicians playing stringed instruments have been dated to 2500 B.C. Retrieved August 3, 2013.

[22]. Fruchtenbaum, The Jewish Foundation of the Life of Messiah: Instructor’s Manual. Class 19, page 14.