11 While traveling to Jerusalem, He passed between Samaria and Galilee. 12 As He entered a village, 10 men with serious skin diseases met Him. They stood at a distance  13 and raised their voices, saying, “Jesus, Master, have mercy on us!”

14 When He saw them, He told them, “Go and show yourselves to the priests.” And while they were going, they were healed.

15 But one of them, seeing that he was healed, returned and, with a loud voice, gave glory to God. 16 He fell face down at His feet, thanking Him. And he was a Samaritan.

17 Then Jesus said, “Were not 10 cleansed? Where are the nine? 18 Didn’t any return to give glory to God except this foreigner?” 19 And He told him, “Get up and go on your way. Your faith has made you well.”

Jesus would soon go to Jerusalem for His final journey.  He was avoiding Herod Antipas who desired to kill Him as he killed John the Baptist.  He was also avoiding the Sanhedrin, until the appointed day and hour when He would give up His life.  It was during this time when He encountered the ten lepers. The context assumes that nine men were Jewish, since Jesus told all of them to see the priests to be declared “cleansed” (Gk. katharizo)[1] A dreaded disease such as this would make men of like affliction live together for their common good, even though they would have despised and hated each other, if they were healthy.

Lepers were social outcasts. Everyone feared they might contract the disease.[2]  In fact, they were required by law to ring a bell or shout “unclean, unclean” whenever anyone approached them.  If any Jew came within two meters of them or within thirty meters downwind of a leper, the Jew was considered defiled and had to go through ritual purification in a mikvah. These lepers had heard of the reputation of Jesus and, together, they came to Him to be healed.  Once they received their healing, everyone left except the despised Samaritan who returned to Jesus to thank Him.[3] The Jewish lepers could go to the temple in Jerusalem to be declared “clean,” while the Samaritan had to see the Samaritan priest in Sheckem to be declared “clean.”[4] However, some scholars believe the Samaritan leper could have entered the Gentile Court of the temple and be declared “clean” by a Jewish priest.[5] Regardless, all ten experienced a messianic miracle.

“Between Samaria and Galilee.” Some scholars believe Jesus traveled through the valley of Beth Shean on this journey where He had the opportunity to minister to Greeks, Samaritans, as well as Jews.  It was the only Greek Decapolis city located west of the Jordan River.[6] 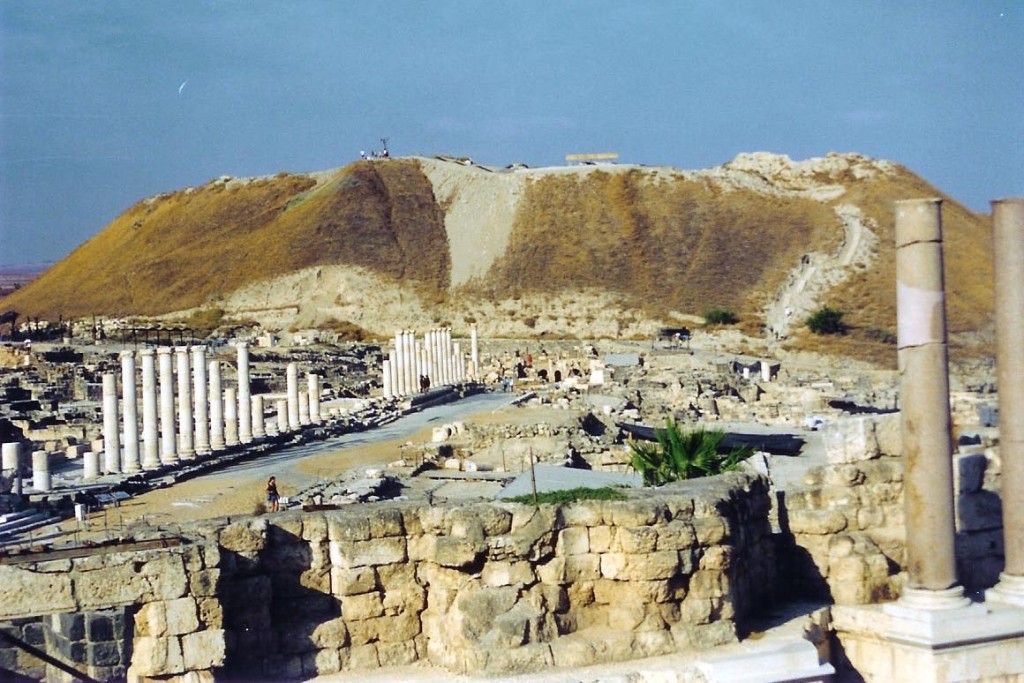 12.03.14.A. THE RUINS OF BETH SHEAN.  The ruins of the Decapolis city of Beth Shean, also known as Scythopolis or Nyssa-Scythopolis, stand as a monument of a bygone civilization. It was originally settled by the tribe of Manasseh (Jos. 17:11-12; Judg. 1:27) and expanded under Greek domination. In the second century B.C., it was resettled by Jews, who renamed it during the Hasmonean rule.  This Jewish population was massacred during the revolt of A.D. 66-70.[7]  Photograph by the author.

[1]. A leper who has been healed was often not called “healed,” but “cleansed” because the disease was symbolic of sin. See also Vine, “Leprosy.” Vine’s Complete Expository Dictionary. 2:364.

[2]. There were four kinds of people that were considered as good as dead, and it was believed that in all four situations their illness was a divine judgment. They were the blind, the leper, the poor, and the childless.