38 Then Jesus, angry in Himself again, came to the tomb. It was a cave, and a stone was lying against it. 39 “Remove the stone,” Jesus said.

40 Jesus said to her, “Didn’t I tell you that if you believed you would see the glory of God?”

41 So they removed the stone. Then Jesus raised His eyes and said, “Father, I thank You that You heard Me. 42 I know that You always hear Me, but because of the crowd standing here I said this, so they may believe You sent Me.” 43 After He said this, He shouted with a loud voice, “Lazarus, come out!” 44 The dead man came out bound hand and foot with linen strips and with his face wrapped in a cloth. Jesus said to them, “Loose him and let him go.” 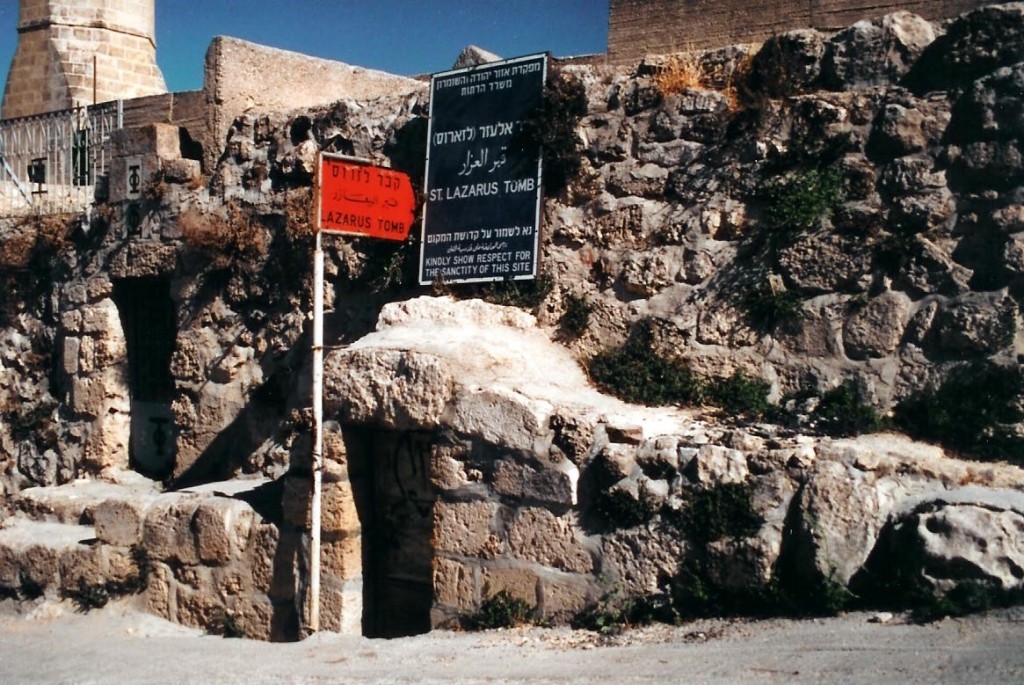 12.03.11.B. THE TOMB OF LAZARUS.  The tomb site has been authenticated; however, the tomb itself has changed over the years. The tomb shelf upon which the body was laid no longer exists and the steps inside the cave were carved in the rock by the Franciscans in 1610.[1]  Today, the tomb is attached to a mosque. Photograph by the author.

“Angry in Himself.” This phrase would be better translated as groaned in Himself or deeply moved within.[2]  The phrase is also found previously in verse 33. The question of course is, “what caused Jesus to groan within?”  There are three possible reasons.

By performing this miracle, Jesus again demonstrated that He had power over death and life and, therefore, He was the true Messiah.  One of the great ironies is that because of His raising of Lazarus from the dead, the leading Pharisees and Sadducees determined to kill Him. Those who had desired Jesus to perform one mighty miracle to prove that He was the messiah, refused to believe what was overwhelmingly obvious.  They chose not to believe; they chose not to see the truth.

The leading Pharisees and Sadducees of the Sanhedrin gathered to discuss the incredible miracle.  They faced two serious dilemmas.

Either way, they would lose. So therefore, Jesus would have to be eliminated. A formal presentation to the Sanhedrin to kill Him was about to be made.  Reports of the miracle spread like wildfire. No doubt, there were those who believed that if any man could perform such mighty acts, he could also overthrow the Roman oppressors and replace the corrupt temple establishment.  Little wonder then that some members of the Sanhedrin seriously worried about their future.

[1]. Wilkinson, Jerusalem Pilgrims Before the Crusades. 112.

[2]. Fruchtenbaum, The Jewish Foundation of the Life of Messiah: Instructor’s Manual. Class 18, page 15.