1 “For the kingdom of heaven is like a landowner who went out early in the morning to hire workers for his vineyard. 2 After agreeing with the workers on one denarius for the day, he sent them into his vineyard.

3 When he went out about nine in the morning, he saw others standing in the marketplace doing nothing. 4 To those men he said, ‘You also go to my vineyard, and I’ll give you whatever is right.’ So off they went.

5 About noon and at three, he went out again and did the same thing.  6 Then about five he went and found others standing around, and said to them, ‘Why have you been standing here all day doing nothing?’

“‘You also go to my vineyard,’ he told them.

8 When evening came, the owner of the vineyard told his foreman, ‘Call the workers and give them their pay, starting with the last and ending with the first.’

9 “When those who were hired about five came, they each received one denarius.

10 So when the first ones came, they assumed they would get more, but they also received a denarius each. 11 When they received it, they began to complain to the landowner:   12 ‘These last men put in one hour, and you made them equal to us who bore the burden of the day and the burning heat!’

Historically, Israel has been referred to as a vineyard, and in this parable, the Landowner calls workers to be employed in His vineyard. Notice the poetic matching themes of verses 13 – 15:

The master is fair

The workman agreed on the wage

The master choses to accept those unwanted by others.

The master desires to be generous to workmen

The cast is rather minimal in this parable:

“Hire workers.”  When someone needed a helper (employee), he went to the city marketplace and looked for day laborers.  At the end of an ordinary 12-hour day, the employee was paid.[1]  The next morning, if there was additional work that needed to be done, the process was repeated.  Laborers never knew if they would have a day of work or, if they did, how much they would be paid. This custom continues to this day.  Even though this parable appears to address labor and economic issues, in reality, it is a parable of grace because it makes no business sense whatever.  But it does make incredible sense in understanding the grace of God. Saint Augustine stated in his commentary that the denarius symbolized an eternal reward in the parable of Jesus, as follows:

The denarius, which the householder orders to be given to all of those who worked in his vineyard, with no distinction between those who labored less and those who labored more, is equally given to all.  By that denarius it is certainly eternal life that is signified, in which no one lives longer than anyone else, since in eternity life has no diversity in its measure.

The essence of the story is that every “employee,” or believer, receives eternal life. It makes no difference whether one comes to Jesus as a child and lives a long faithful life serving Him, or comes to Jesus moments prior to death.

“About nine in the morning.”  Literally, “the third hour.”  The Roman Empire functioned on a time measurement of twelve hours during daylight and four watches during the night.[3] Yet it is the eleventh hour that is a focal point of argument – those who were employed at the end of the day received a full days’ wages.

“I’ll give you whatever is right.”  The hired men do not agree on a set wage, but trust that the employer will be fair (Gk. dikaios, meaning just or fair).[4] 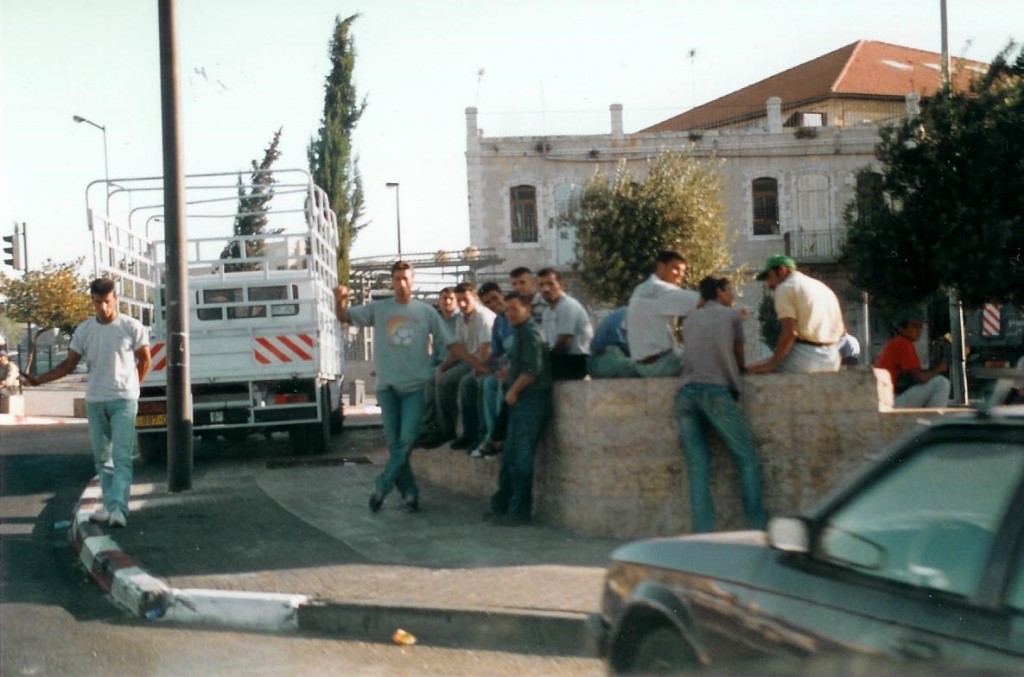 12.03.09.A. MODERN DAY LABORERS IN JERUSALEM.  Arab construction day laborers and craftsmen with their trucks and tools wait to be hired for the day near the Damascus Gate, just as laborers did in the days of Jesus.  Photograph by the author.

“When evening came.”  At the end of the day the laborers were gathered and each received the payment for his work. The lesson is obviously not relative to economics, as every worker received the same salary. The ancient custom of day laborers for hire is still practiced today throughout the Middle East,[5]  including in an area outside Jerusalem’s Damascus Gate as illustrated in 12.03.10.A below.

“Their pay.”  Literally the term means the wage, which culturally speaking is a full days’ wage. There is no implication for an hourly adjustment. The initial interpretation is an economic one – a person who does more work should get paid more.  However, God’s interpretation is one of grace – one who comes to salvation in the last minute of life receives eternity in heaven just as does the one who lives a faithful life. The classic example of a “death bed conversion” is the thief on the cross who asked Jesus to remember him.  Jesus did.

“So the last will be first.”  There is a degree of sadness in this phrase.  Just as God’s ways are not man’s ways, Jesus states that there will be those who will not learn God’s ways and, therefore, they will be last.  This does not mean a loss of salvation.  But, because they did not surrender full control of their lives to God, they suffer loss of opportunity to be fruitful and productive for the Kingdom of God (cf. Mt. 16:21; 17:22-23).[6] 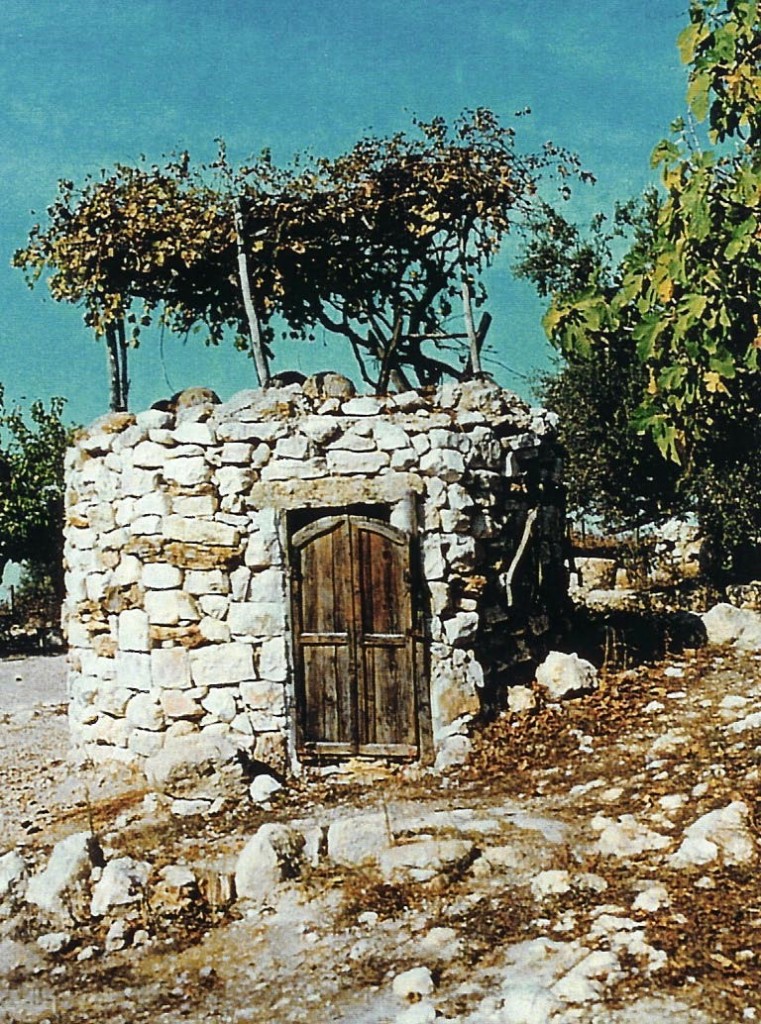 12.03.09.B. AN ORIGINAL VINEYARD WATCHTOWER.  This original Old Testament era agricultural watchtower has been well maintained over the centuries and is still used.  Vineyard owners were constantly occupied in watching for thieves who would steal livestock, grapes, or crops.  The owner and his servants would take turns on the observation deck, which was shaded with a grape arbor. The lower section served as a bedroom chamber.  It was not uncommon for a family to live in this tower up to six months of every year. A similar tower was known as the “Tower of the Flock” near Bethlehem. Photograph by the author.

The landowner was of noble generosity while the workers looked upon the unfairness through eyes of greed.  A denarius was the typical wage paid for a day laborer or foot soldier.[7] Yet those who worked all day desired more, because of their greed, even though they had previously agreed to the denarius as their wage.  Was this fair? Yes, because they had received according to what was previously agreed. The men who worked only part of a day had the same financial responsibilities at home as those who worked all day. Did any express thankfulness to the generous nobleman?  Hardly! The action hardly seems to be fair. The workers who worked all day received pay equal to those who were hired near the end of the day.  However, from God’s perspective, He is the one who offers eternal life by His grace.  If one accepts the gift of salvation early in life, he will someday be with our Lord.  If one accepts the same gift of salvation near the end of his life, he too will someday be with our Lord.  Most readers might conclude this is somewhat unfair.  But, if God would be fair, then no one would receive such a gracious gift.

When teaching in Israel and Jordan, students have told this writer that these vineyard workers had an “evil eye.”  Throughout the Middle East, the proverbial expression “evil eye” is associated with an individual who is self-centered, envious, greedy, and constantly on the prowl to take advantage of someone (Cf. Prov. 23:6; 28:22).[8]  Herod the Great and his good friend Caiaphas were two men who would have been deemed to have had the evil eye; they were constantly looking for another innocent victim. The vineyard workers who labored all day at an agreed-upon wage quickly developed an “evil eye” when others received the same wage for less work.[9]  The basis of justice in matters like this has always been “equal pay for equal work.”  However, the focus of this parable is a reference to the grace of God and it was never intended to be an economic principle.[10]

Finally, the ministry of Jesus in the Galilee area captured the attention of many Gentiles who were traveling along the Via Maris as well as those who lived in Israel and nearby Decapolis. Consequently, there were Gentiles coming to faith and who believed that they too would have an inheritance in the Kingdom of God.[11] There can be no question that this parable was directed, in part, toward those Jews who resented them.  This parable underscores the grace of God. No matter how long one has worked in the proverbial vineyard, salvation is by grace of which no one can boast (Eph. 2:8-9).  The irony is that other Jews were very evangelistic and brought Gentiles into the Jewish faith. These situations underscore the various Jewish sects and theological chaos that existed.

[3]. See Appendix 16 for further details on divisions of the day.