LIGHT OF THE WORLD

12 Then Jesus spoke to them again: “I am the light of the world. Anyone who follows Me will never walk in the darkness but will have the light of life.”

13 So the Pharisees said to Him, “You are testifying about Yourself. Your testimony is not valid.”

14 “Even if I testify about Myself,” Jesus replied,

“My testimony is valid,

because I know where I came from

and where I’m going.

But you don’t know where I come from or

15 You judge by human standards.

I judge no one.

My judgment is true,

because I am not alone,

but I and the Father who sent Me judge together.

19 Then they asked Him, “Where is Your Father?”

“You know neither Me nor My Father,” Jesus answered. “If you knew Me, you would also know My Father.” 20 He spoke these words by the treasury, while teaching in the temple complex. But no one seized Him, because His hour had not come.

As mentioned previously, in the temple were four huge golden menorahs that shone brightly.[1] The rabbis said that these lamps lit up the city of Jerusalem[2]  and represented the Shekinah Glory of God — God’s visible presence to Israel.[3]  It was there when Jesus and His disciples were in the temple courts that He said that He was the light of the world – a comment with profound meaning in that He said He was the Shekinah Glory of God.

“I am the light of the world.”[4]  This was a statement Jesus made about Himself, as it represents the following meanings:

which results in life

which results in death.[6]

The words of Jesus were specifically suited to the Feast of Tabernacles.  Note the recorded history in the Mishnah.

There were four golden menorahs with four golden bowls at the top of each, and four ladders each leading to a bowl.  Four strong young cohanim (priests) would climb up with pitchers each holding nine liters of oil which they would pour into the bowls. From worn-out drawers and girdles of the cohanim they made wicks, and with them lit the menorahs; and there was not a courtyard in Jerusalem that was not lit up by the light of the Beit-HaSho’evah [festivals]. Pious men and men of good deeds would dance around [the menorahs] with lit torches in their hands, singing songs and praises, while the Levites played harps, lyres, cymbals, trumpets, and innumerable other musical instruments.

Every evening of the festival, as the sun was setting four gigantic menorahs in the Court of the Women were lit.[7]  These gilded candelabra were fifty cubits (75 ft.) high and their soft light shone throughout the temple courtyards and nearby Jerusalem. These were reminiscent of the pillar of fire that led the Israelites through the desert centuries earlier and were symbolic of the Shekinah Glory of God.  Now around these lighted monuments the people danced and sang for joy for what God had done in their lives.  The sounds of flutes and stringed instruments were everywhere.  The Levites led everyone in singing Psalms as even the priests and Pharisees joined the joyful procession that danced throughout the courtyards and encircled the menorahs.[8] But the Sadducees, the faithful antagonists of the Pharisees, mocked the celebrations.

Throughout Jewish and Christian history, darkness has always been associated with the ignorance of God, which leads to sin and death.  Light always referred to the knowledge of God and eternal life, and God is the only true source of light and understanding.  The light was in the temple, which at that time was considered the presence or dwelling place of God.  One of those menorahs was known as the Servant Lamp. Some scholars believe that Jesus referred to Himself as the light of the world when He stood by the Servant Lamp, meaning that He would not only bring knowledge of God but also salvation, joy, and happiness.

Ironically, one of the four menorahs known as the Servant Lamp refused to light after the crucifixion. For the next forty years, until the temple was destroyed, priests and Levites must have wondered why this menorah would not light or, if it was lit, why it didn’t remain lit. Many years later the Jews wrote in the Jerusalem Talmud an observation that, to them was a mystery.

Forty years before the destruction of the temple, the Servant Lamp refused to light.

It was a continuing silent message of Jesus that He is the light of the world.  However, the worst was yet to come.  Because the Jewish leaders rejected Jesus, the Romans would bring utter destruction upon their beloved temple.  Josephus recorded the account in which a menorah was taken to Rome.[9] Whether this was the Servant Lamp is unknown, but it clearly was the ancient symbol of God’s people being led into captivity once again (see 17.01.01.Q1).

“You are testifying about Yourself.” The Mosaic Law required two or three witnesses to validate truth (Deut. 17:6).  This was written for civil matters and the civil court (See Jn. 8:21-30 below). The same principle was applied to biblical interpretation.  So by the first century, the leading Pharisees had created their own rules and regulations, which they touted as truth because they created their own witnesses.

“My testimony is valid.”  When the New Testament writers used terms such as “testimony,”  “bore witness,” or “I have seen and testify,” these were statements of legal terminology.  Such legal statements were also common in both the Roman and Greek cultures whereby the author placed himself under an oath concerning the truthfulness of his conversation.[10]

“Even if I testify about Myself.”  To exceed the compliance of Deuteronomy 17:6, Jesus offered several witnesses beginning with Himself.

But His accusers were ignorant on all four points. 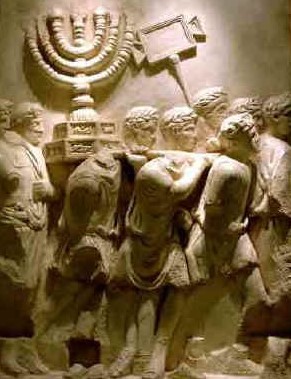 11.02.17.A. THE TEMPLE MENORAH ON THE ARCH OF TITUS.  The victorious scene depicted on the Arch of Titus in Rome shows the temple menorah being carried to Rome. Some historians believe these artifacts are now in the Vatican. Obviously the artists who carved the menorah took artistic license, as the menorahs were much larger than could be depicted on the Arch. The Romans were so proud of their victory that the arch was built to commemorate it.  Also shown on the arch is a titulus.[11]

Two witnesses was the legal standard to prove a matter in a court of law. And Jesus provided more than two witnesses, beginning with the prophets and John the Baptist. Hence the statement, “the witness of two men is valid.” The judicial system is based upon Deuteronomy 17:15 and 19:15, and was also a principle of law in neighboring cultures as well.[12] Furthermore, the Oral Law stated that a man was not to be believed if he was speaking about himself. Even the Greeks said that a person could not present evidence that would support self-interest.[13]

While this Mosaic Law pertained to civil matters, by the first century, the same principle was also applied to theological studies.  John recorded that Jesus was first qualified to bear witness to God’s plan (Jn. 8:14) and second, that the Father was with Him. Furthermore, Jesus knew from where He came and of His eternal future.

“By the treasury.” In the temple courtyard were thirteen chests, each with a trumpet-shaped opening called a Shopheroth.[14] Into these chests, people placed their offerings and it was where the leading Pharisees were known to announce their giving of gifts.[15] This treasury was in the Court of the Women, not because it was exclusively for them, but that was the limit to which they could go unless they came to offer a sacrifice.[16] The Court of the Women and the Court of the Gentiles were the two most public courts of the temple complex.

[1]. This menorah lamp has seven lamps. However, the menorah honoring the victory of the Maccabean revolt and rededication of the temple has nine lamps.

[2]. Fruchtenbaum, The Jewish Foundation of the Life of Messiah: Instructor’s Manual. Class 15, page 16.

[3]. Fruchtenbaum, The Jewish Foundation of the Life of Messiah: Instructor’s Manual. Class 15, page 16.

[7]. Barclay, Jesus. 266; There appears to be a difference among scholars as to whether there were two menorahs or four, and the height of them.

[12]. The Greeks and Romans and several ancient civilizations has similar laws as proven by the Code of Hammurabi and other ancient codes. See http://courses.cvcc.vccs.edu/history_mcgee/courses/his101/Source%20Documents/wc1d01.htm Retrieved January 28, 2015.

[16]. An example of a woman’s sacrifice was when Mary and Joseph offered two doves to be sacrificed after Jesus was born.