JESUS TEACHES IN THE TEMPLE

11 The Jews were looking for Him at the festival and saying, “Where is He?” 12 And there was a lot of discussion about Him among the crowds. Some were saying, “He’s a good man.” Others were saying, “No, on the contrary, He’s deceiving the people.”        13 Still, nobody was talking publicly about Him because they feared the Jews.

14 When the festival was already half over, Jesus went up into the temple complex and began to teach. 15 Then the Jews were amazed and said, “How does He know the Scriptures, since He hasn’t been trained?”

16 Jesus answered them, “My teaching isn’t Mine but is from the One who sent Me. 17 If anyone wants to do His will, he will understand whether the teaching is from God or if I am speaking on My own. 18 The one who speaks for himself seeks his own glory. But He who seeks the glory of the One who sent Him is true, and there is no unrighteousness in Him. 19 Didn’t Moses give you the law? Yet none of you keeps the law! Why do you want to kill Me?”

When Jesus began to teach (Jn. 7:14), it was probably along the along the eastern side of the temple. It was known as “Solomon’s Porch,” since some of the building materials were said to be from the original temple. The porch provided shelter from the hot summer sun and the cold winter rain. Here, rabbis and sages brought their students and disciples to teach them “in the shadow” of Solomon’s wisdom. Jesus, in the same tradition, taught His disciples here; but His wisdom was beyond that of Solomon and had caused many confrontations with the religious elite.[1]

As stated previously, Jesus was profoundly confrontational with the Pharisees on the issues of Sabbath regulations, divorce and ritual cleanliness. He desired man to have a degree of freedom while at the same time to understand that some covenants (i.e., marriage) are simply not to be broken with certain exceptions.[2]

“The crowds . . . the Jews.”  John carefully made the distinction between the two groups.  “The crowds” in the temple area were faithful Jews who had come to worship God. Many of them were honestly debating the identity of Jesus and the new insight they received concerning their Bible.  Some became believers; some were skeptical and indecisive, while others did not believe. “The Jews,” however, were the leading Pharisees who had the authority to retaliate upon the synagogue rabbis (also Pharisees) and the common people.

“You have a demon!”  To accuse Jesus of being demon possessed was, without question, the greatest insult, and a verbal proclamation of rejection. That would be surpassed only by the physical rejection of crucifixion.

“How does He know the Scriptures, since He hasn’t been trained?” The leading Pharisees, Sadducees, and scribes were wise enough to ask the question, but sufficiently ignorant not to answer it. They graduated from the best theological schools in Jerusalem, either from the School of Hillel, the School of Shammai, or one of the other seminaries, and had become academic snobs.  They were the brightest and the best scholars, having committed to memory volumes of Scripture and oral laws.  Consequently, they could not understand how anyone would have more knowledge than they did.  It was deeply humiliating when confronted by someone who had never attended an academy or been a disciple of a leading rabbi. The leading Pharisees realized that Jesus knew the Scriptures better than they did, even to the verb tenses.  Evidently, they had forgotten the discussion Jesus had with them on the temple steps decades earlier when He was only a twelve-year-old boy.[3]

“If anyone wants to do His (God’s) will.” The phrase does not refer to an occasional decision, but rather a commitment to a life in which there is a continual desire to do the will of God. It is not a happenstance but a commitment.[4]

Jesus was so popular among the common people that they could not believe that anyone would try to kill Him. So when someone said, “You have a demon!”  They thought He must have been imagining this or be demon-possessed. The question was certainly not asked in the same manner as had been done previously by His accusers. This was followed by another question, “Who wants to kill you?”  The fact that a Jew would kill another Jew was repulsive and unthinkable; hence, they thought He was demon-possessed.   This remarkable phrase clearly points to the fact that many did not realize their leaders were plotting to kill Jesus.

“If a man receives circumcision on the Sabbath.”   The word “man,” refers to a male child, but is not limited because at times Gentile men, who converted to Judaism, were also circumcised. The Law of Moses required that a boy child was circumcised on the eighth day of life.  However, this was a surgical procedure that violated the Oral Law of cutting on the Sabbath,[5]  so the Jews correctly broke their Oral Law and permitted the circumcision to take place on the Sabbath.[6]  Here Jesus used their life illustration that He broke their Oral Law to heal a man.  The issue was not the healing, but the legalistic attitude of breaking the Oral Law the Pharisees created to encumber the people.

On a side note, circumcision is the sign of the Covenant of Abraham and, therefore, is primarily for the Jewish people. Note the following examples that are of particular interest.

“Rather judge according to righteous judgment.”  The use of “judgment” in this case has the meaning of discernment needed to make correct decisions.  It is a totally different context than judgment upon condemnation, which was consistently forbidden because that alone is the prerogative of God. 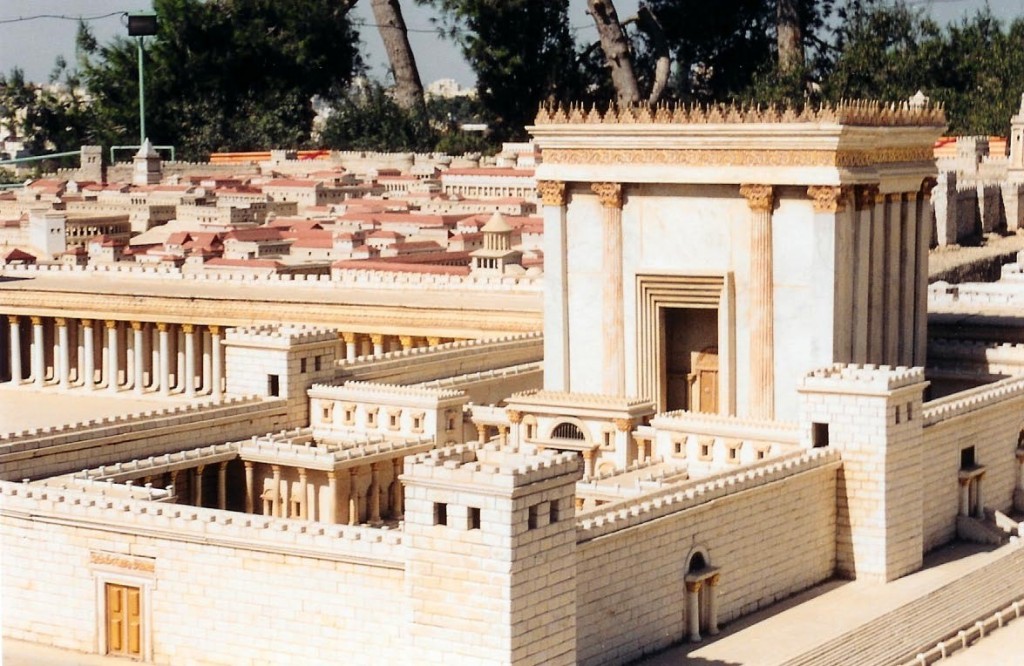 11.02.12.A. MODEL OF THE TEMPLE.  The temple was constructed of white limestone with gold appointments. It was considered one of the most beautiful buildings in the ancient world. Photograph by the author.

[5]. Babylonian Talmud, Yoma 85b and parallels.

[6]. An excellent resource for further Sabbath study is Hagner, “Jesus and the Synoptic Sabbath Controversies.” 270-88.