JESUS IS LED OUT

Mk. 20 When they had mocked Him, they stripped Him of the purple robe, put His clothes on Him, and led Him out to crucify Him.

Jn. 17 Carrying His own cross, He went out to what is called Skull Place, which in Hebrew is called Golgotha.

Throughout the  Roman world, men who were destined to the cross carried the cross-beam to the site of crucifixion completely naked.  This was done to add to their humiliation. However, in Israel men were dressed which was probably a concession to Jewish sensitivities about nakedness.[1]

“Led Him out.” The Roman soldiers who led Jesus to the cross knew they were violating Roman justice. Yet they had to obey Pilate or their careers, and possibly their lives, would have been threatened.  In the Old City of Jerusalem is a narrow winding street named the Via Delarosa, meaning the “Way of Suffering.” Nearly every tourist group today walks down that narrow winding street.  Tradition says it is the path that Jesus walked from the Antonio Fortress to Calvary.[2]  However, history records that the city was destroyed and rebuilt many of times.[3] Therefore, the authentic Via Delarosa is under many tons of rubble and no one knows where it was. Even the beginning and ending points are debated. 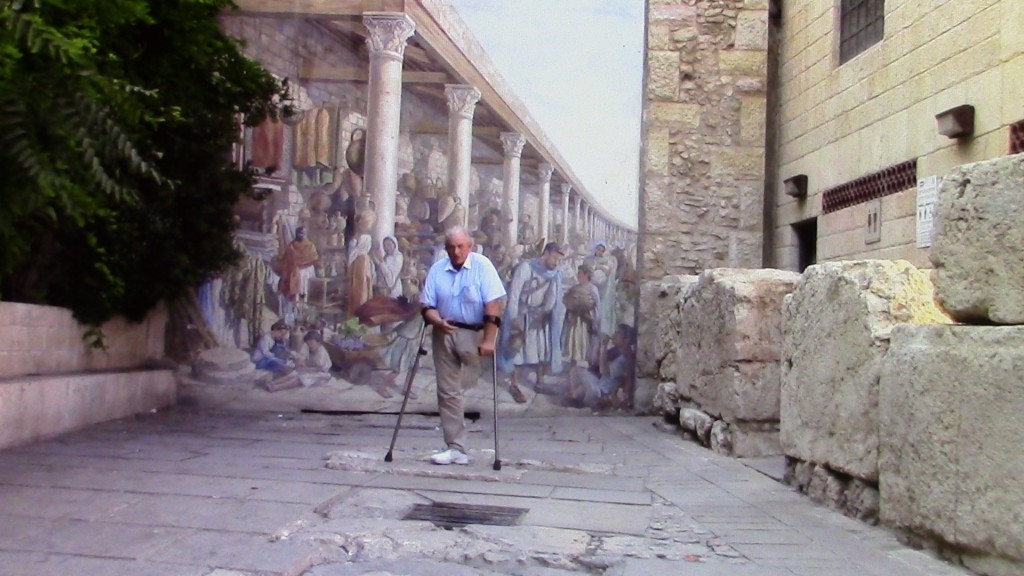 16.01.07.A. A WALL MURAL OF A FIRST CENTURY JERUSALEM STREET SCENE. The author stands in front of a painted mural of a typical street scene in first century Jerusalem (see 02.04.01.V).  The street was colonnaded with shops on both sides of the street. Jesus would have carried His cross along a street like this, as the Romans wanted everyone to see what happened to anyone who dared to rebel against the empire. Photograph by Paivi Heinrich.

It was common practice that those who were to be crucified were forced to walk through the busiest streets to give maximum exposure to the event.  Punishment by crucifixion had nothing to do with just punishment, but was to instill a horrific fear in anyone who was thinking of starting a rebellion. Note the following comment by Marcus Fabius Quintilianus (c. 35 – c. 100) who is generally referred to just as Quintilian.[4]

When we crucify criminals, the most frequently used roads are chosen where the greatest number of people can look and be seized by this fear.  For every punishment has less to do with the offense than with the example.

The concept of using crucifixion to manipulate the decisions of others was used by General Titus when he began his onslaught against Jerusalem in the First Revolt.  His Tenth Legion had surrounded the city, his war machines were in place, and any Jews who were captured were crucified so that those who stood upon the city walls could see their loved ones and neighbors dying in excruciating agony. Josephus said that the purpose was to induce the Jews to surrender. Of those captured, he said,

…They were accordingly scourged and subjected to torture of every description, before being killed,[5] and then crucified [them] opposite the walls.[6] Titus indeed commiserated their fate, five hundred or sometimes more being captured daily; on the other hand, he recognized the risk of dismissing prisoners of war, and that the custody of such numbers would amount to the imprisonment of their custodians.  But his main reason for not stopping the crucifixions was the hope that the spectacle might perhaps induce the Jews to surrender, for fear that continued resistance would involve them in a similar fate.

It should be noted again that crucifixion was not a permitted form of execution for a Roman citizen. In fact, the great orator Cicero essentially said that the thought of it should be far removed from the mind of a citizen.[8] However, if a Roman citizen, such as Sejanus, was tried and found guilty of treason, he would have experienced another form of execution. The Apostle Paul benefited from this Roman law.

“Carrying his own cross.”  Jesus is often incorrectly portrayed as dragging a cross that consisted of a post and crossbeam. He did not drag His cross, He carried the crossbeam, known as the patibulum. The post was already secured in the ground.  It was common practice in the Roman world to have the criminal carry his crossbeam to the site of the crucifixion.[9] At times so many were crucified that some criminals were crucified on olive trees to which a cross beam was attached if two branches did not suffice.[10] 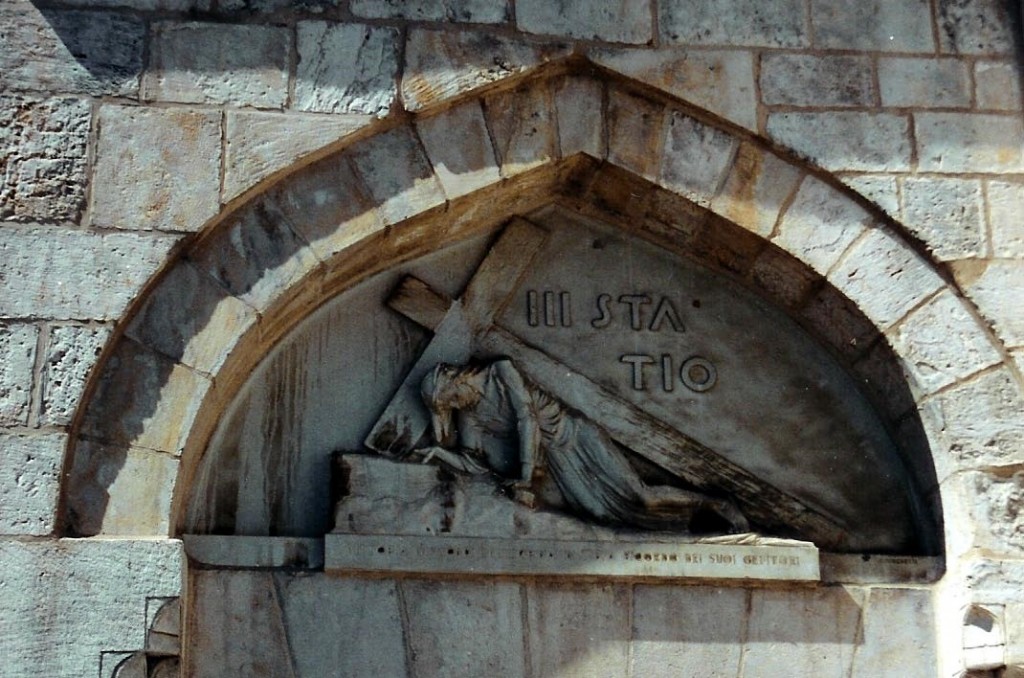 16.01.07.B. A SCULPTURE OF JESUS DRAGGING HIS CROSS. He is shown falling down due to the heavy load. This is the traditional image that has transcended the centuries.  Yet Jesus did not drag or carry the entire cross as shown, but only the heavy crossbeam to the crucifixion site where the post was already in the ground.  Photographed along the Via Delarosa by the author.

The description of the horrific method of crucifixion was preserved for us in the second century B.C. when the Roman comedian wrote his work titled the Mostellaria.  In this comedy, a person is said to,

Carry a crossbar (patibulum) through the city, which was then attached to an upright stake (crux).”

What was his name?  Who? Mostellaria[11]

The English word cross comes from the Latin word crux,[12] which was the upright stake.  This account agrees with the custom of the first century in Judea.  The weight of the entire cross would have been too heavy, even for a Roman soldier to carry.

Finally, the imagery of Jesus carrying His crossbeam is reflective typology of Isaac carrying his wood for the burnt offering.  Isaac, however, was spared from being a human sacrifice; Jesus was not.

“Skull Place … Golgotha.”  This is an excellent example of the differences between Western and Eastern (Jewish) thinking.

It was called such, not because of the appearance of a skull, but probably because so many crucifixions were held there. In such designated locations,[13] crucifixion posts were often permanent fixtures.  It probably has a colloquial meaning was “the place of crucifixion.” When Jesus carried His cross, in true Roman tradition, He carried only the crossbeam because the post was already secured in the ground.

Today there is a small hill at the Garden Tomb that has the obvious appearance of a skull, but that is not to say it had the same appearance in the first century, nor is it necessarily the place where anyone was crucified. It should be noted that this region is considered to be one of the most active earthquake regions of the world.  Therefore, the hill that has the appearance of a skull most likely was merely a hill in the first century.

The gospels do not mention a specific hill or mount, but simply mention that the name of the crucifixion site is the skull. To translate the skull place, or  Golgotha, as the place of dead men’s skulls is not correct. Rather, it was the place of death. The name is translated correctly as follows:[14]

[1].  During the Jewish civil war (90-88 B.C.), Jannaeus crucified 80 women in Ashkelon whom he suspected of being witches. He stripped them naked and, for the sake of modesty, nailed them facing the cross where they died. About 800 Pharisees were also crucified at the time, by other Jews. See 03.05.10. The Book of Jubilees 3:30-31 and 7:20 indicates that a loin cloth was used at times, but not always, when Jews were crucified.

[2]. The tradition is of Crusader origin.  They created many such traditions and identified “traditional sites” of various biblical events to appeal to wealthy European tourists.

[5]. Throughout the Old Testament Period, nearly all those who were “hung on a tree,” were executed first.  The hanging of the body was for public observation only. For example Deuteronomy 21:22-23 assumes an already executed person was hung on a tree.  See also Dead Sea Scroll 4QpNah fr 3-4 1:6-8.  In this case, Titus followed a pattern used by many ancient cultures. Some Islamic governments still practice this today, as did Yasser Arafat of the Palestinian Authority who hung the bodies of suspected Israeli collaborators from poles and water towers.

[6]. The term “opposite the walls” means that the crosses were placed in a position “opposite of the (city) walls” so those on top of the city wall could witness the bodies of friends and family members.  The observers probably believed that the crucified victims were still alive at the time.

[7]. This narrative is an excellent example of a historian’s bias. While Josephus presents accurate details of the event, he rarely states anything negative about the Roman generals and commanders. After all, when he was writing his books, he enjoyed luxurious retirement and a villa in Rome, and he was not about to ruin that by criticizing those who were supporting him. See also Webb, “The Roman Examination and Crucifixion of Jesus.” 697-98.

[8]. Cicero, For Rabirius on a Charge of Treason 5.16. Marcus Tullius Cicero (107-44 B.C.) was a Roman lawyer, politician and philosopher whose death came by an assassin.

[13]. Fruchtenbaum, The Jewish Foundation of the Life of Messiah: Instructor’s Manual. Class 25, page 2.