1 Before the Passover Festival, Jesus knew that His hour had come to depart from this world to the Father. Having loved His own who were in the world, He loved them to the end.

2 Now by the time of supper, the Devil had already put it into the heart of Judas, Simon Iscariot’s son, to betray Him. 3 Jesus knew that the Father had given everything into His hands, that He had come from God, and that He was going back to God. 4 So He got up from supper, laid aside His robe, took a towel, and tied it around Himself.

5 Next, He poured water into a basin and began to wash His disciples’ feet and to dry them with the towel tied around Him.

6 He came to Simon Peter, who asked Him, “Lord, are You going to wash my feet?”

7 Jesus answered him, “What I’m doing you don’t understand now, but afterward you will know.”

Jesus replied, “If I don’t wash you, you have no part with Me.”

9 Simon Peter said to Him, “Lord, not only my feet, but also my hands and my head.”

10 “One who has bathed,” Jesus told him, “doesn’t need to wash anything except his feet, but he is completely clean. You are clean, but not all of you.” 11 For He knew who would betray Him. This is why He said, “You are not all clean.” 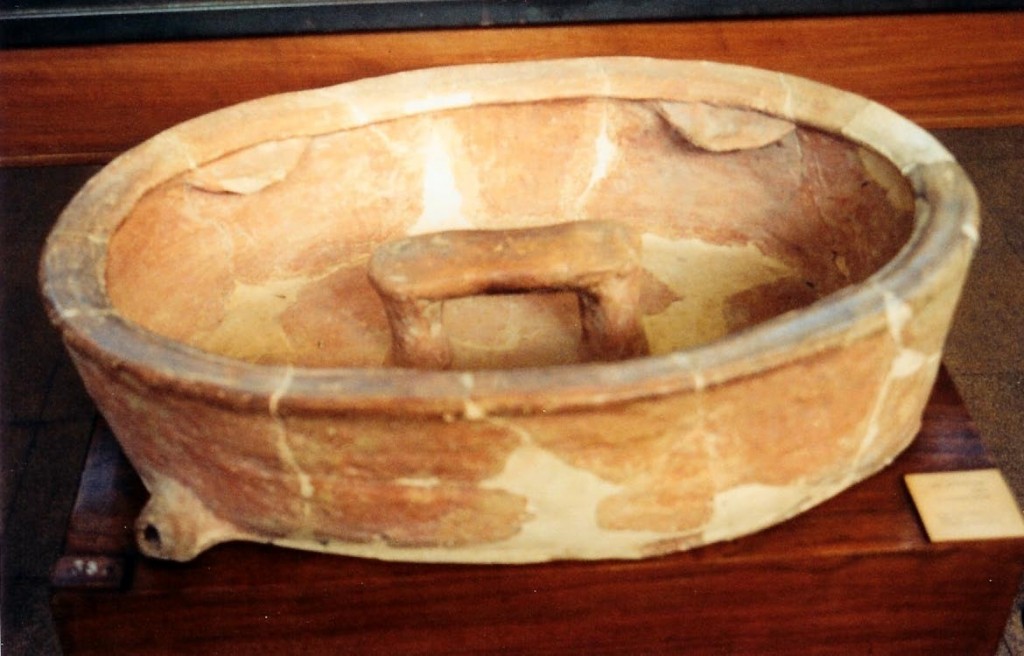 14.02.07.A.  FOOT-WASHING BASIN. A pottery basin similar to the ones that may have been used for foot washing in the first century.  Basins found in wealthier homes were made of metal, such as lead or copper.[1] Photographed by the author at the Rockefeller Museum in Jerusalem.

“Took a towel, and tied it around Himself.”  A towel around the waist was the common dress of a slave. Jesus had taken off His more expensive outer clothing, put on the garment of a slave – the lowest kind of slave – and became a servant to the disciples.[2]  Household servants had no honor, dignity, or position. Jesus made Himself into the lowest human form. The Apostle Paul said Jesus made Himself nothing and took on the very nature of a servant (Phil. 2:6-8).

“Began to wash His disciples’ feet.” How interesting it is that, immediately after the disciples argued as to who would be the greatest in the kingdom of Jesus, their leader began the most humbling act of the evening. The head of the household would never perform such an act.  Therefore, when Jesus began to wash the feet of His disciples, He broke all the cultural traditions with His message of servanthood.[3] Furthermore, the disciples already had their feet washed when they entered the house.  The act by Jesus was an object lesson of humility and servanthood.  This act is parallel to the “first shall be last and the last shall be first” teaching.  His values are essentially upside down from what the world considers to be logical and normal.